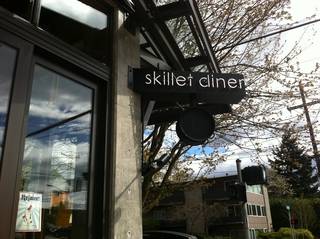 Skillet Diner, the long-awaited stationary counterpart to the Skillet Street Food truck, opens Friday. Owner Josh Henderson originally planned to have a wall of well-worn skillets, but says he’s now envisioning chandeliers made from the used cookware that he has been collecting from future patrons, in exchange for gift cards.

Skillet Street Food and its signature silver Airstream was one of the original trucks that ushered in our era of food truck trendiness. A few favorites from the truck have found a permanent home at the restaurant, including the poutine and of course the signature burger. However the menu is heavy on actual diner food, including meatloaf, a grilled peanut butter and jelly, and a pork belly and cornmeal waffle.

Chef Brian O’Connor, most recently at Blueacre, is in the kitchen. Skillet Diner will open at 7 a.m. for breakfast and stop-in coffee service, and serve food until midnight.