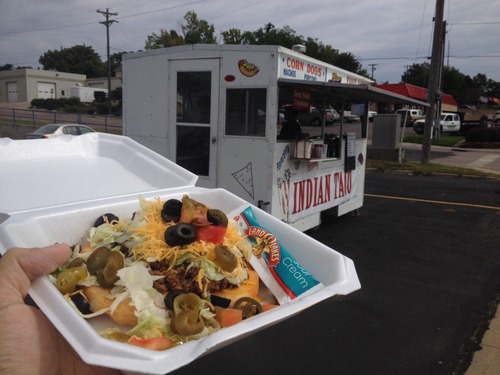 As always, the food truck business continues to be interesting here in Sioux Falls. Here are two more instances of people trying to break into the local eating scene:

• Indian Tacos on the east side: Meyer Concessions (above), located in the Handy Man Parking lot at 10th and Fairfax, serves up a fairly tasty version of the fair favorite Indian Taco. The meat was seasoned well and the toppings were fine. The only unfortunate thing, and it’s sort of a big one when you’re talking about an Indian Taco, is the base is not a traditional Fry Bread, but rather flattened and fried roll dough. It’s not bad, it’s just not the same.

Still, another quick lunch option on the days they are operational. They post their schedule on their Facebook page here. They also serve deep-fried Oreos and Twinkies. And make a special deep-fried homemade apple pie on occasion.

• Kickstarter for a Sioux Falls Taco Truck?: A recent California transplant wants to open a taco truck, California Surf Taco Mobile Grill, here in Sioux Falls. And the potential owner and cook, Chris Heinemeyer, is turning to the social fundraising site Kickstarter to try and make this a reality.

Originally from Anaheim, and boasting ‘cherished family recipes’ and inspiration from traditional street food, Heinemeyer is trying to raise $3,000 to get this business going.

Best of luck to all, and enjoy!