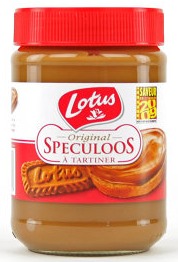 Some say Speculoos is the new Nutella. It looks like peanut butter but tastes like the gingerbread, cinnamon-flavored cookie it’s made from, known as biscoff. (You may know the flavor from those cookies handed out on Delta airlines.) The popular Belgian cookie via paste is making its way over the Atlantic and now it’s coming to food trucks, slowly but surely.

If you’ve been fortunate enough to have stumbled upon the spread while abroad, chances are you’ve returned home with a new sugary obsession to share. Lotus Bakeries introduced Speculoos to the U.S. market this year; but even so, most Americans don’t know about it yet. A gradually increasing number of food trucks are looking to change this. Wafels & Dinges in New York sells its own version (called Spekuloos) and offers the spread as one of many waffle toppings, as does L.A.’s Waffles de Liege.

In the height of the food truck boom, will Speculoos ever really catch on, on the street food scene? George Wu of Waffles de Liege believes it will. “If the popularity of Liege waffles grows,” says Wu, “more people will get a chance to try Speculoos, and as a result, more people will talk about it and experiment with it on different food; and before long, it’ll be a kitchen staple like Nutella.”

Fingers crossed, Waffles de Liege’s use of the cookie-made-spread will cause a domino effect of sorts among other Southern California food trucks and thus the spread of scrumptious Speculoos.