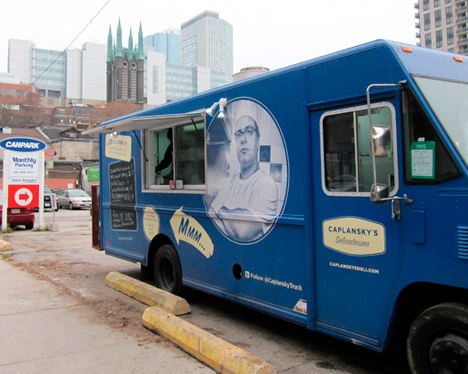 Six months later than planned, Zane Caplansky’s food truck has finally found a permanent home in the parking lot across the street from the old CityTV building at 99 Queen East and Dalhousie.

The truck – nicknamed Thundering Thelma – set up shop for the first time Monday and is open weekdays from 11 am to 3 pm. Cash only and, no, they don’t give receipts.

His signature smoked meat sandwiches ($7) seem more thickly sliced than at his College Street deli (caplansky.com) and randomly fatty, something that might frighten first-timers.

Note that she’s got a catering gig Thursday but will be back on Friday and all next week.