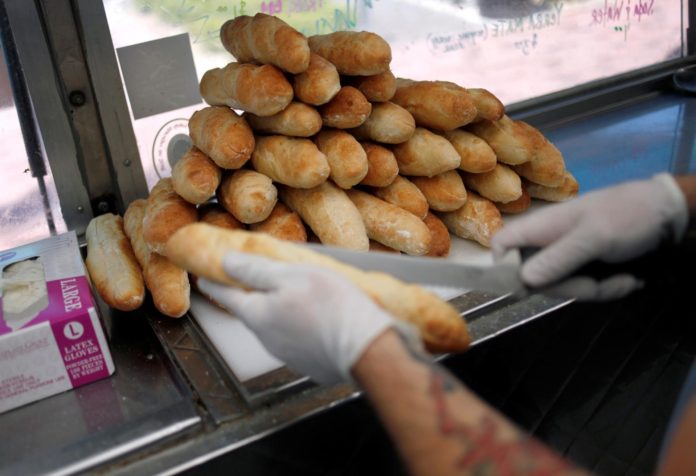 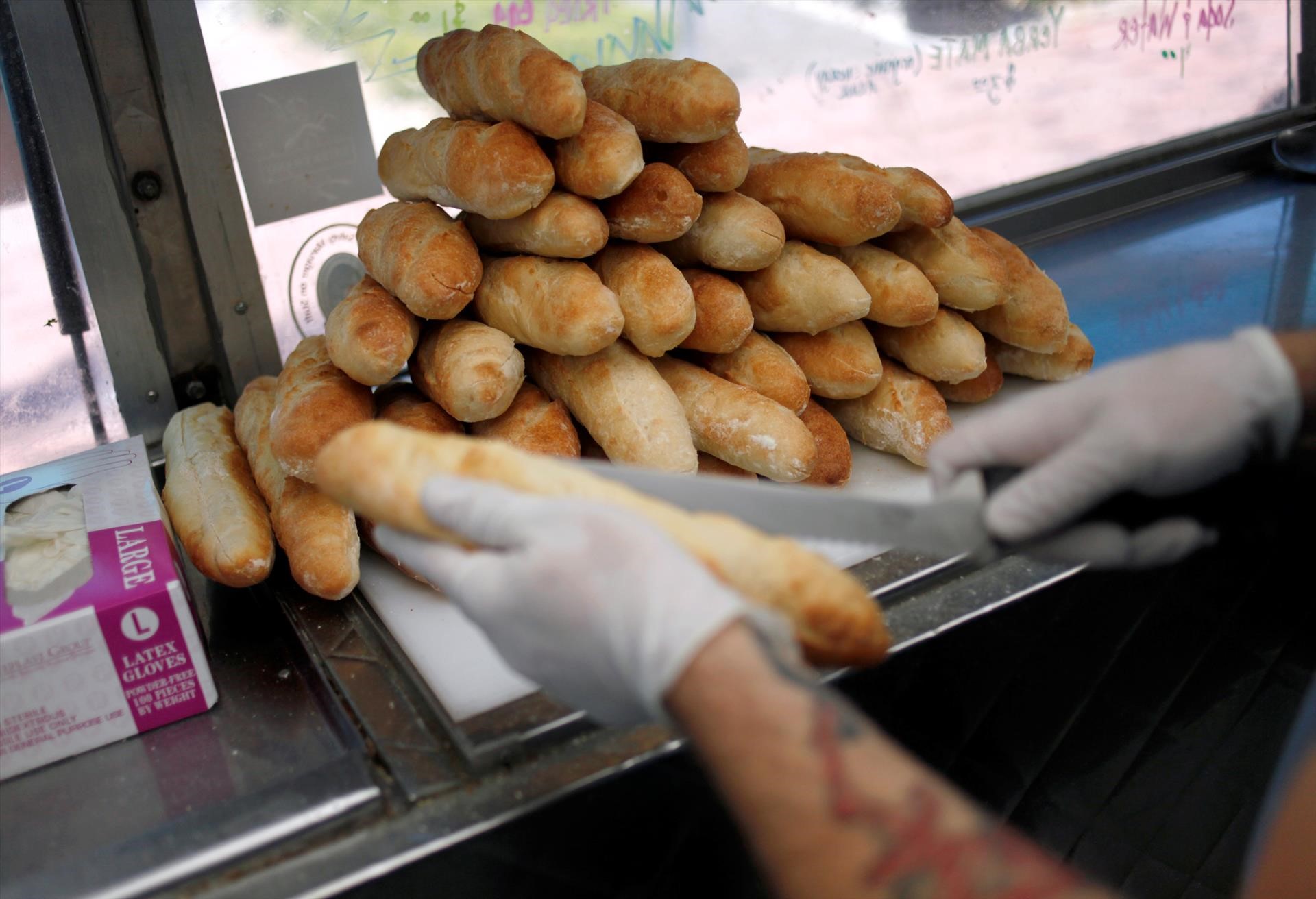 Editor’s note: Behind the Scene is an occasional series meant to take readers places they might not otherwise see. This week, Jason Ashley Wright spends a day inside a popular food truck.

It was fitting that Philip Phillips had Patsy Cline’s “If You’ve Got Leavin’ on Your Mind” on his.

He pointed out the irony while stuck a few blocks from Guthrie Green, where he was supposed to be at 10:15 a.m. Thursday.

His food truck had broken down. Again.

On the bright side, these experiences have allowed Philip, owner of Lone Wolf Banh Mi, to learn a new skill set.

“I’ve definitely turned into a mechanic,” he told us while his truck was stuck south of the railroad tracks on Elgin Avenue near First Street. “I’ve had to.”

No doubt, there was a little stress involved that morning as Philip waited on his wife, Danielle, to bring back a distributor coil from an auto parts store so they could make it to the Green’s Food Truck Wednesday event – the first of what organizers hope will become a summer tradition.

Despite the Lone Wolf truck’s setback – and a second trip for another auto part – Philip, Danielle and cook Jeff Crow maintained a light attitude peppered with the occasional random song lyric.

Usually, the three of them – or four, if it’s a busy event – arrive at least an hour early to calmly clean and set up for lunch or dinner service. But their 10:15 arrival time was going to be pushed until at least 11 a.m. on this day, giving them 30 minutes.

You’d think he might take his frustration out on the truck. But no tools were thrown, no doors slammed.

In fact, he even praised the truck.

“I will definitely keep this truck forever,” Philip said while waiting on Danielle to return. He might get a better truck eventually (multiple ones, if he follows his dream); but this is the original Lone Wolf.

That name comes from doing things his own way, Philip said. He’s operated Lone Wolf about seven months, and out of about 100 times he’s worked it, he’s sold out of food 97 times.

While they waited on the side of Elgin, a car stopped by the truck.

A little later, another guy in a white truck parked on the opposite side of the street, walked over, saw that the food truck wasn’t open and walked back, looking disappointed.

Close to 11:30 a.m., when other vendors like Andolini’s, Local Table and Lola’s had already started serving at the Green, that second part was installed on Lone Wolf.

“In the words of James Brown, ‘Please, Please, Please,’ ” Philip said. Seconds later, it started, and they let out a little celebratory Lone Wolf cry.

Minutes later, with Lone Wolf driving behind us, people spotted the food truck as it turned onto Brady near the Green and started clapping.

The truck looped around the park and settled in a space on the east side. They had barely parked when more than 20 people formed a line.

“I’m so sorry,” Philip told the crowd, letting them know forces beyond his control made them late – and would make the line wait an extra 30 minutes.

“It’s worth it,” one woman shouted back, smiling.

They plugged in the generator and started setting up. Philip started by cleaning the kitchen surfaces, then sliced 60 loaves of Antoinette Baking Co. baguettes open for his banh mi sandwiches, a French-Vietnamese delight of spicy pork, cilantro, cucumber, carrots, jalapeno, pickled daikon radish and aioli.

Their accelerated prep time was like watching choreography in the tightest, best-smelling space imaginable. Philip washed and cut the cilantro while Jeff started cooking meat on the grill. After Danielle tore pieces of tape and adhered them to a shelf (a timesaver when wrapping banh mi orders in paper), she wrote the menu on the outside window.

“By the time we’re ready to open, I’ll be ready to pass out,” Philip said, laughing.

He told Jeff that they’d start serving as soon as the pork was done. More folks were getting in line, and Philip knew they all needed to get back to work.

“OK, we’re open, yay!” Danielle said out the window to the first customer.

People ordered banh mi, picking the kind of aioli they wanted and saying they liked this on it or that left off. They ordered kimchi fries, too, with candied bacon and extra cilantro, or no cilantro and an egg on top. 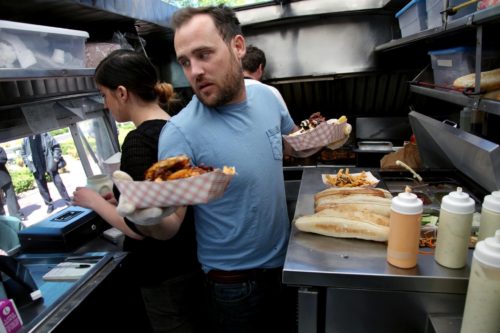 “The bay is full, and this order’s done,” Philip told Danielle.

“Got it,” she replied, then looked at a customer: “I’m going to get these orders out, and I’ll be right with you.”

They made multitasking look as if it could be a style of dance, greeting customers, jotting down their orders, taking cash, handing them food, wrapping sandwiches – and smiling the entire time.

“I should’ve eaten breakfast,” Philip said, echoing our own sentiments as he squirted sauce on orders of kimchi fries, his plastic gloves stained yellow-green at the finger tips from stuffing cilantro in banh mi. “I just want a slice of pizza from Andolini’s.”

“We have seven banh mi left,” he said. “We might have exactly what we need to finish.”

Most folks who ordered banh mi got it, but they did run out – they almost always do. But the last few customers were quite content with kimchi fries.

“Even though Lone Wolf showed up late, it was definitely worth it,” said fan Philip Jaques, who ordered kimchi fries. “Two words: Candied. Bacon.”

Lone Wolf’s Philip, smiling after the last order was placed, seemed happy with how the day went.

At one point during the thick of things, Danielle started singing Neil Diamond’s “Sweet Caroline.” Apparently, it’s a “mission” for each of them to say or sing a lyric that gets stuck in the others’ heads, Philip said.

“Thank you!” he exclaimed. “I’ve had ‘If You’ve Got Leaving on Your Mind’ in my head for hours.”

“You’re welcome,” she said with a smile.

It all started with potato soup.

“Right when I moved away for college, I realized I didn’t like living off fast food,” said Phillips, who grew up in Cleveland and went to junior and high schools in Sand Springs. “I called Mom and had her teach me how to make all her recipes I grew up on.”

His “culinary journey” started at Kokoa Chocolatier with chef Steven Howard. Then, he trained under Geoffrey van Glabbeek at the late Lava Noshery.

He’s also been a wok cook at Keo and a sushi chef at the late Tsunami.

After that, while cooking a little more than a year at Whole Foods, Phillips worked toward having his own food truck, Lone Wolf, which had its first service in September 2012.

Popular as his Vietnamese-French fusion offerings are, he and his wife, Danielle, aren’t necessarily eating that at home.

“(We) always cook this five-hour, slow-roasted whole chicken stuffed with Anaheim or hatch green chilies,” he said. “The pan gravy from this bird is like heaven. Best leftovers ever.”

You can find Lone Wolf most weeks from 6 p.m. until “sell out” Wednesdays through Saturdays at Soundpony, 409 N. Main St. Their schedule changes, so Phillips advises checking outfacebook.com/lonewolftruck