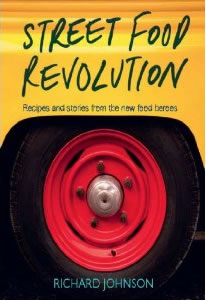 Forget expensive restaurants – some of the best food around is being served straight from the back of trailers, carts and vintage vans. A grass roots revolution is happening in British food, and it’s being championed by Chiswick’s award-winning journalist, broadcaster Richard Johnson.

Inspired by his travels, and a love of global street food – served by the locals to the locals – Richard Johnson founded the British Street Food Awards in 2010 to celebrate our own foodie heroes and prove once and for all that the old days of cheap greasy sausages with over-fried onions are well and truly over.

Armed with a book of contacts and a family rail card he set out across the UK and Ireland to meet the traders and see what they had to offer. He was so impressed by what he found that Street Food Revolution was born.

Here he tells the remarkable stories of 20 budding entrepreneurs who have chosen wheels over bricks and mortar to peddle their wares. Meet Tony Stone of of Stoats, who takes the plain out of porridge and adds whisky, cranachan and fudge to make it anything but; Kitty Travers who runs La Grotta Ices from her south London flat where the freezers bulge at the seams with amazing homemade creations such as Raspberry and Fig Leaf Granita and Chocolate Pudding Ice Cream; or Yianni, who fell so much in love with American street food that he decided to open the cult Meatwagon this side of the Atlantic, armed with the perfect meatloaf and a homage to the NY cheese burger.

Street food is all about the food we want to eat. These vendors serve up delicious meals that are prepared and cooked right in front of you. They offer only a few dishes but they do them to perfection. What’s more, they work with the seasons and use fresh local, ingredients as a matter of course, being cheaper and easier to source. And, in a modern world of twitter and facebook it’s easy to tell your customers where you’ll be at short notice.

With stunning location photography by Laura Edwards and over 60 cherished recipes from the vendors themselves, Street Food Revolution is a fascinating and important look at what’s going on with British food today.

Richard Johnson’s writing appears regularly in The Sunday Times Magazine and the Daily Telegraph, and he’s a contributing editor to Esquire.He has written and presented radio documentaries about everything from fatherhood to kitchen waste and exorcism, and is a regular contributor to Radio 4’s Food Programme. Richard has fronted several prime-time television series – including Full on Food and Kill It, Cook It, Eat It for the BBC – and is the judge on Channel 4’s Cookery School.