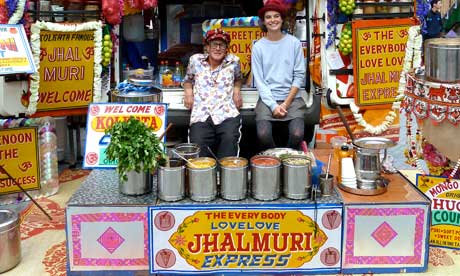 Street food in Britain fell out of fashion for a century, but it’s back and it seems it’s here to stay. What’s your favourite street food and where do you buy it?

Forget the summer of love – this is the summer of street food. Everyone’s giving it a go. Today, on the British Street Food Awards website, we announce the complete list of finalists. We had 2,000 entries – five times as many as last year. Admittedly, the quality has been variable. There was a woman with a fish slice, who cooks frozen burgers on a George Foreman grill (who didn’t make it), and a man who forages for ingredients at the seaside, and then cooks them off in café made of driftwood (who did).

The Awards were set up in 2010 to recognise the best of the 10,000 mobilers who sell their wares on Britain’s streets and the intervening 12 months has seen the arrival of so many street food styles (no-one was doing “sliders” or high-end hot dogs in 2010), and so many traders, that it’s difficult to keep up.

When I was writing my book, Street Food Revolution, I hadn’t even heard of Angus Denoon. He used to sell Jhal Muri – the Kolkata street food – from a supermarket trolley. But he’s upped his game since then. He now sells from a van (see above and click the picture for the full effect) which he dresses up (depending on his mood) as a temple, a brothel or a harem. And he’s converting his first Boris Bike with a serving dispenser that straddles the handlebars. In the same way that pop-ups and supper clubs are renegotiating the restaurant experience, Angus knows that street food is all about making food fun.

And it’s ridiculously on-trend. Even in a recession, street food is still affordable. But, at the same time, the best of the traders make sense of all those highfalutin concepts that food journalists bandy around – like “fresh” (because it’s cooked right in front of you, and not left waiting around in the kitchen), and “seasonal” because traders tend to grab whatever is cheapest at the market. At no more than £6 a serving, these traders work on very tight margins.

We have a noble tradition of street food in Britain – as far back as the 12th century, shopkeepers were selling hot sheep’s feet. They graduated on to hawking pies and pasties, and everything from warm eels to pickled whelks, oysters, fried fish and hot peas. With a slice of rhubarb tart for dessert. Something, however, happened along the way and we became prudish. By the end of the Victorian era, eating in public was something suitable only for the working classes.

It took the burgeoning Farmers Market movement to make street food popular again. Thanks to the markets, it became acceptable (and acceptably middle class) to eat a sausage in bun – if the sausage was rare breed, and the bun was a hand-drawn sourdough. Then the music festivals got with it, and a whole new generation considered street food afresh. It’s still young, and middle-class, with food bloggers on facebook and Twitter rushing to the next big thing. But that’s changing – the idea of high-quality meals on wheels appeals to everyone.

Some argue that it’s becoming too commercial. Thomasina Miers from Wahaca (a judge at last year’s British Street Food Awards) is the latest big name chef to take her “brand” out to a new audience. Jamie Oliver already has his ice cream van. And when we named Street Kitchen as one of our finalists for 2011 – run by restaurant chef Jun Tanaka – we had complaints. We had sold out the punk aesthetic, apparently. But we just liked Jun’s slow-cooked lamb casserole.

The Americans still do the best street food in the world. The quality mightn’t be consistently as good as India, or Thailand, but the spectacle – and the theatre – more than compensate. The Elysburg lemon, for instance, sells the sweetest sourest homemade lemonade. From a 10-ft fruit made of bright yellow polyurethane. And Maximum Minimus sells pulled pork from a lunch wagon that’s been transformed into a giant silver pig. It’s got ears and a tail – and sunglasses if it turns sunny. In America, street food is showbusiness.

I just got back from LA, where I was interviewing Wolfgang Puck (to coincide with the opening of his Cut restaurant in London next month), and reporting on food trends for the Food Programme on Radio 4. And I found that, whereas British mobilers tend to cook up the foods of their childhood – whether it’s immigrants selling their native cuisine or entrepreneurs raiding the book shops – American mobilers are getting a lot more imaginative.

I found that throughout the United States, a new breed of cuisine is emerging. The mobilers are selling fusion food, bringing together different dishes and ingredients to create a new American cuisine. I tried Japanese Hot Dogs, smothered in soy mayo, teriyaki sauce and nori. I tried Korean tacos. And I tried Viking soul food. In a car park in Santa Monica, I realised that – because it’s still relatively cheap to start up your own van – street food is now some of the most exciting food in the world.

And it’s starting here too. Last month I got a call from Vinod Patel of Chula Fused Foods. He worked on the opening of the first Chipotle Mexican Grill in London, but wanted to work for himself. So he began fusing Mexican food with Gujarati, Pakistani, American and Nepalese influences. The end result? London’s first Indian burrito, which has been available at Tachbrook Street Market since June. This whole street food thing might just outlast the summer …