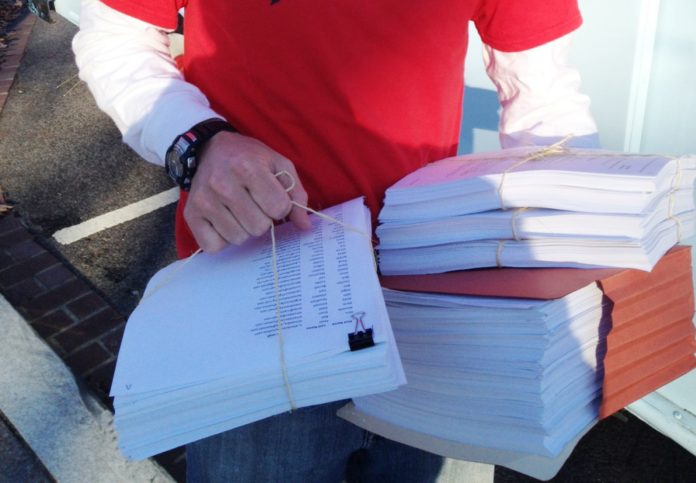 The more than 1,000 comments that mysteriously disappeared amid the District’s latest round of proposed mobile-vending rulemaking have now been found.

The Post previously reported that the pro-food truck comments, generated through the D.C. Food Truck Association’s website RulesThatWork.org, seemingly disappeared in thin air. The group said its supporters sent 1,171 letters, but 1,128 of them never went through. The D.C. Department of Consumer and Regulatory Affairs, which collected the comments, said its IT team looked into it and found no problems on its end. The food truck association said it found no immediate technical glitches either.

D.C. Food Truck Association Executive Director Che Ruddell-Tabisola tells Y&H that he spent more than 20 hours over Thanksgiving weekend trying to track down what happened to the missing comments. He has now discovered that the emails were in fact sent but bounced back. The reason why is still unknown.

DCRA reopened the comment period last Friday, but told the Post the decision had more to do with soliciting more public input in general than with the missing comments. The food truckers aren’t taking any chances with anything getting lost in cyberspace again. Yesterday, they printed them out and hand-delivered them.

The comments could help to determine where food trucks can vend in the city. One of the most contentious proposals would restrict food trucks from vending in areas with fewer than 10 feet of “unobstructed” sidewalk. The D.C. Food Truck Association says that when you take into account obstructions like lamp poles and tree boxes, eight of D.C.’s 10 most popular truck locations would be off-limits.

The city has said it would make exceptions to this rule by creating “Mobile Roadway Vending” zones with designated spots for food trucks, but operators say it’s unclear how they will choose those locations, how many spots will be available, and which trucks will get them. (Read more from Y&H’s recent columnon food trucks’ lobbying efforts.)