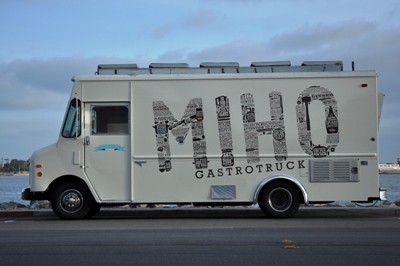 The street food craze has spread nationwide, and here in San Diego, the wheels are definitely in motion. Food trucks are popping up on some of our most frequented corners — and this is not your typical street meat. In some cases, prominent chefs are in the driver’s seat, serving up global fusion and gourmet dishes that are redefining mobile fare. Others are just out to make your daily caffeine fix a bit brighter.

Whatever they serve, you’ll find them posting their daily locations online and tweeting them in real time, with loyal fans sure to follow. A Facebook page dedicated to San Diego’s food trucks features more than a dozen roaming hot spots. Here are a handful of favorites with major curb appeal, plus a new one to watch for.

Tabe BBQ: Mexico meets Asia at this mobile eatery owned by chef Todd Ichinaga, formerly at the Peninsula Hotel in Beverly Hills. Ichinaga serves up tacos, burritos and bowls that incorporate Asian favorites like Korean BBQ beef and spicy pork, with salsas made from scratch daily. Tabe (pronounced Tah-bay) is short for Taberu, which means “to eat” in Japanese.
Twitter: @tabebbq; 858-279-0040

Joes on the Nose: The proprietor of this hard-to-miss orange truck isn’t a guy named Joe. He’s a surfer named Dave Wasserman who wanted to serve coffee (“Joe”) to other surfers and beachgoers looking to keep warm. He’s been doing so for three years, offering specialty coffees, tea, smoothies and more. His signature drink, the island-inspired Aloha Latte, is a decadent mocha with coconut and macadamia flavors topped with homemade coconut whipped cream.
Twitter: @joesonthenose; 858-373-8001

Chop Soo.ey: This truck is the brainchild of two of San Diego’s biggest culinary players: David Cohn of Cohn Restaurant Group and executive chef/partner Deborah Scott. It hits the streets running this week, following its grand opening on Nov. 6. A menu highlight is the signature “El Pignini,” a panini pressed with roasted pork, smoked ham, chow-chow and grainy mustard on a baguette. Just look for the samurai pig on the side of the Chop.Sooey truck.
Twitter: @Choptruck; 619-929-0167