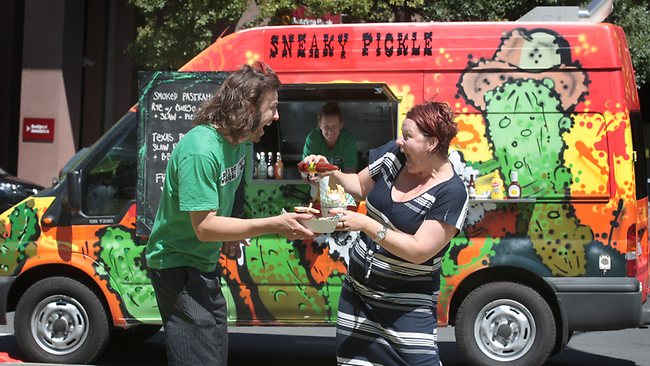 A council committee approved a set of guidelines for the mobile vendors, after a survey attracting 950 responses – a council record – found overwhelming support for them.

But the number of permits to be issued remains up in the air.

In a lengthy debate, Lord Mayor Stephen Yarwood passionately defended the food vans but several councillors said there were too many.

The committee voted to ask for a report outlining why staff had recommended capping permits at 50.

There are 52 food vans trading under the scheme’s trial period, a number Cr Sandy Wilkinson said should be slashed to 20.

Mr Yarwood said that would be “ridiculously conservative” and the council would be labelled “a bunch of old fashioned people out of touch with what the city wants”.

“I’ve had at least 1000 people come up to me and say this is the best thing the city ever had,” Mr Yarwood said.

Mr Yarwood said the food vans helped bring a “critical mass” of people into town that would encourage new businesses to open, rather than hurting current traders.

He said two food vans had already transformed into bricks and mortar businesses.

Cr Sandy Wilkinson unsuccessfully called for permits to be capped at 20 and for a report into the economic impact of food vans on permanent traders and their relative start-up and running costs.

“We have vacant shops in Hutt St and Hindley St,” Cr Wilkinson said.

“This could compound that situation and see more cafe operators, say in James Place, driven out of business.

“While it’s good to be seen to be promoting vitality we could in fact be doing the opposite.”

Cr Mark Hamilton agreed 50 was “a step miles too far”, while Cr Anne Moran said small business owners were “not happy” and the council should “tread cautiously before we vote the people who pay rates out of business”.

Staff gave a brief explanation to the committee that 50 permits was close to the number allowed in Calgary, Canada, which has a similar population to Adelaide.

A final decision on permit numbers will likely be made next month after a report to council.