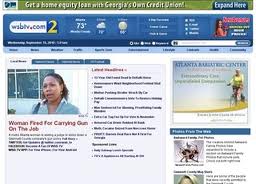 ATLANTA — An accident involving two boys has left one of them dead.The incident happened late Thursday night on Eloise Court in southeast Atlanta.

Police said the boys were hanging onto a food wagon (DYAN FOOD TRUCK) when the driver started pulling away and ran the children over.

“The driver asked the children to get off the vehicle. He asked the parents to assist in getting the children back,” Capt. Van Hobbs with the Atlanta Police Department said.

Investigators say when the truck started moving the kids jumped off. They believe the driver accidently ran over them.

“One of the parents said ‘You just struck my child.’ He stopped and backed up and that’s when a second child was struck,”

Medics rushed a 10-year-old to Grady Memorial Hospital where he died from his injuries.

The other child’s great grandmother said a 7-year-old injured his legs arms and back.

The Grandmother told Channel 2 Action News her grandson had no business outside late at night.

Police have not charged the driver, but the incident remains under investigation.Investigators said the 7-year-old suffers from a broken leg, but is expected to be OK.