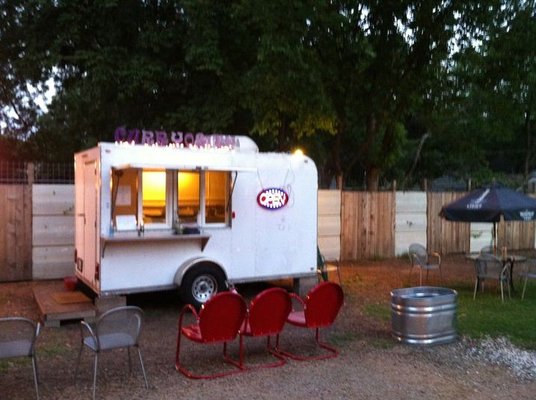 East Cesar Chavez Street isn’t known for Indian food or even food trucks, but Curryosity opened for business two weeks ago and began offering curries and decadent desserts out of a trailer.

The trailer looks underwhelming compared to some of the other tricked-out, full-sized food trucks Austin has to offer. The immobile white trailer is bare save for its name written in a purplish graffiti font, but what Curryosity lacks in pizzazz, the food makes up for in flavor.

Walking up to the trailer, you’re greeted by Sean O’Keefe, co-owner of the truck, who is both welcoming and helpful in navigating the menu.

The food is flavorful and affordable. Bursts of cilantro, cumin, tumeric, curry and coconut — staple ingredients from East Asian cuisine, are found throughout the menu. Each a la carte dish ranges from $5-7. For the $10 meal deal, you get a hearty portion of curry with rice, a drink and a dessert. As a new trailer, the menu is limited — only offering red, green and yellow curries, which vary in spice from hottest to mildest, respectively.

Chock-full of Curryosity’s “hell sauce,” the red curry is definitely not for the faint of heart. With a base of dehydrated red chillies, the thick sauce is loaded with delicious bamboo shoots and fresh zucchini that absorb the spice yet retain the crunchiness essential to a hearty curry. Attempting to eat such an intensely spicy dish outdoors in the Texas heat is a serious battle — a battle the owners must recognize, because they don’t start serving food until 6 p.m. Luckily, the food is served in takeout boxes because this particular dish is best enjoyed with air conditioning.

The real gems at Curryosity are the desserts. Although the dessert menu varies daily, do not pass on the coconut custard topped with chocolate and toasted coconut if it’s available. The coconut custard embodies a creamy sweetness that, when contrasted with the bitterness of dark chocolate, brings your taste buds to life. Curryosity also offers a plain yogurt sauce to compliment the hell sauce called “heaven sauce,” but heaven is really in the dessert offerings.

Curroyisty’s menu may be small, but the culinary team for the truck is undoubtedly setting itself up as the up-and-coming staple in Austin’s mobile food obsession.