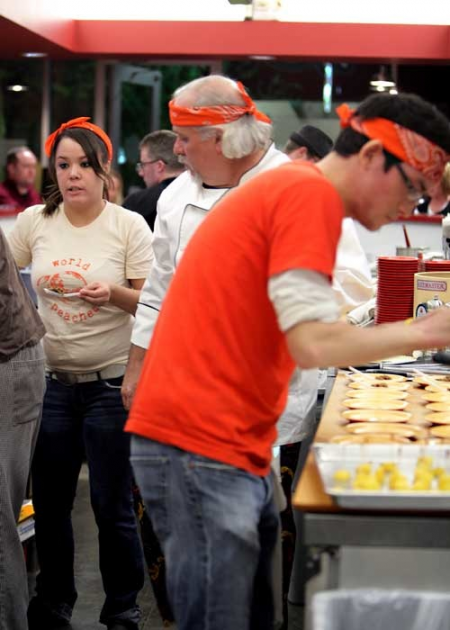 I marvel at really successful people. Those who take their dreams and their happiness into their own hands and make a mark on the world.

Last month, after spending quite a bit of time determining the common traits of truly successful people in some area of their lives, I featured John Donovan’s story about health.

This month I’d like to feature another friend of mine, someone who I greatly admire for taking a huge risk and finding a way to make it pay off: Eric Silverstein of The Peached Tortilla in Austin, Texas.

I’m going to talk about how Eric embodies the following 7 traits when it comes to entrepreneurship:

Just a little back story: I met Eric around 2004, maybe 2005, through another friend. We got to know each other through our passion for sports, women, and entrepreneurship. And over the years, I realized how much Eric loved food. He’s an excellent cook. So when he started sharing his concept for taking his love of food to the next level, it made perfect sense that he would actually do something about it. Here’s his story, encapsulated by the 7 Pillars. I’m using Eric’s words because his personality comes across really well in the interview, and I’ll follow with commentary in italics.

The Story of The Peached Tortilla

In early 2009 I had an idea for a modern taco concept that nobody had yet created. At that time, Korean tacos were exploding in LA at the Kogi food truck. This was before Kogi had become a national brand. Also, when I had visited Atlanta, I noticed a a couple of popular restaurants incorporating Southern flavors into tacos. My idea was to incorporate both Asian and Southern flavors into a gourmet taco, fast casual concept. I wanted to put my own unique twist into it, using a lot of flavors that I had grown up eating. I drafted a business plan over the course of 5-6 months, and then in November 2010 started trying to raise money. After spending over 6-8 months raising capital, I decided to start with a food truck with the long term goal of opening a restaurant.

There’s not a whole lot I don’t do when running The Peached Tortilla. When I first started, I did literally everything. I did all the purchasing, payroll, social media, scheduling, day to day operations, bookings, etc. Now, I have taken myself out of the truck and have two managers running my day-to-day operation. I spend the majority of my time focusing on clients, ways to grow the concept, and marketing.

The Peached Tortilla currently has a 4-star rating on Yelp from 117 reviews.

I gave up everything to start TPT.  I gave up a six figure job as a lawyer.  I gave up a salary for a year, health insurance, 401K benefits, all my favorite sports teams.  Not to mention all the money I invested into TPT.  You name it.  The only thing I didn’t give up was my girlfriend, my family, and my close friends.

I stood to lose a lot, the largest of which was my reputation.  I didn’t want to be known as the entrepreneur that failed (even though plenty fail).  I felt like people would have looked at me differently if I was the guy who took the leap and fell on his face.

You have to understand something about this when you read that Eric gave up sports. I mean, the job is obvious–he gave up a very secure, high-paying job. But he didn’t do so irresponsibly. He had a plan, he had investors, and he had saved up a lot of money. But sports…Eric used to watch every Atlanta Hawks game, every Atlanta Falcons game, and he spent quite a bit of time on fantasy baseball. If you’re a guy or a sports fan, think how big of a sacrifice it would be to simply give it all up for a bigger dream.

I asked Eric for the 3 things that took the most time and effort to learn. His response:

When starting a new business, you’re going to hit an innumerable number of roadblocks. If you’re able to stay focused on the goal and keep going, you have a fighting chances. As Eric puts it:

The entire first year was a roadblock.  In April I was ready to throw in the towel.  I felt like people who I trusted took a dump on me.  I had staff steal from me.  I really felt like I had been kicked to the curb and was depressed at where I was in the process.  I went to sleep one night telling my girlfriend that I was done with the business; and I meant it.  I was ready to put in my 30-day notice to terminate my truck lease.

I never imagined it would be this hard; and I hated talking about it because I put myself in this position.  I was the one who wanted to open the business.

Things have gotten better incrementally since that month.  We won Eater Austin’s Food Truck of the Year for 2011.  We were Austin’s representative at the San Francisco Street Food Festival, cooking next to other out-of-city vendors like Seattle’s Skillet.  Long term, I want walls.  I want a restaurant.  I want to realize my dream from 3 years ago.

Staffing is problematic.  I have learned that most people in this industry don’t have much respect for their potential employer.  The modern day hourly employee will quit on a dime without any notice.  Sometimes they won’t even show up for a scheduled interview (this has happened at least 6 times).  There is a severe lack of work ethic.  The more effort I have to spend on staffing, the more it takes my time away from doing things that will make the business more profitable.

Although staffing isn’t a problem in every industry, if you’re starting a new business, you’re going to run into at least one consistent, extremely annoying inconvenience that gets in the way of optimization. But you have to stick with it. The Peached Tortilla doesn’t work without a staff, so although Eric has to commit extra energy to finding good people, he knows it’s worth it.

It takes time to grow your brand.  Some restaurants explode on the scene, others grow steadily.  David Chang’s original noodle bar was a disaster at first but then he blew up on the scene.  For TPT, it has been a slow and steady ascent.  I never felt like we exploded suddenly.  I feel like all restaurant brands need to give themselves at least a year, if not more, for them to steadily establish themselves.

You can’t go into a startup thinking you’re going to be an overnight success. In fact, with that attitude you’re just setting yourself up for disappointment.

TPT is a brand that I have worked on developing for over 3 years.  It’s my baby, and I have poured blood, sweat and tears into it.  Without incredible passion in what you do, you will never, ever be the best at it.  I believe in TPT because I believe we provide a tremendous, unique product that people will want to eat again.

My love of food was shaped by my childhood in Asia and my family.  In other parts of the world, it is less about how big your house is or how many cars you have, and more about great food and great company.  I really do embrace that.

My theory is that you have to constantly be absorbing and applying new knowledge to be a success. No food truck is an island.

I have learned a ton about mobile food over the past year and a half.  But I would stress that each market is different.  LA is different than New York which is different from Austin.  I overestimated the volume you could do in Austin for lunch.  Austin, even with a fairly large downtown workforce, does not boast a very dense population, which hurts food trucks.  Not to mention, there are over 2,000 permitted mobile food vendors.  Also, the parking laws really limit you in Austin.  Austin does not have the population of LA and New York.  I have learned to focus on other revenue streams to help us maintain profitability.

Everybody has a dream job. It might change over time, or maybe you have several. Whenever you think of a new dream job, read through these pillars and ask yourself honestly if you have what it takes to be a success in that position or that startup. It’s okay if you don’t–you can always have new dreams. But if you truly embody these traits when it comes to that dream, plan it and execute it. It might be the most satisfying–and successful–thing you’ll ever do.

Thanks, Eric, for sharing your story. I’m in awe of what you do, and I’m jealous of everyone in Austin who gets to eat at The Peached Tortilla.