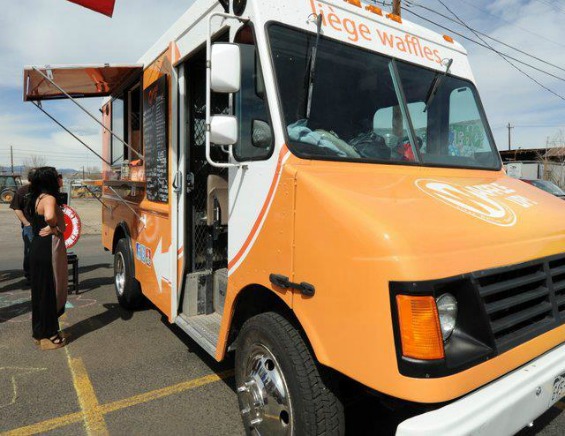 Denver’s food-truck scene already offered just about every type of cuisine that you can imagine when Tom McCarty and Jasmine Spoonemore thought they’d come up with an opening large enough to, well, drive a truck through. And in April, McCarty and Spoonemore debuted Waffle Up, where they create Liège waffles hot off the heavy-cast iron and served with your choice of toppings.

McCarty, who attended the University of Denver restaurant management school, was inspired after he traveled to Belgium, where Belgian waffles can be found on every street corner, served out of street carts. He spent two years experimenting before he perfected his own recipe. Jasmine Spoonemore is a student at Johnson & Wales University who has a degree in baking and pastry arts and is working towards a degree in food-service management. She met McCarty while volunteering at a 5K, and they have been working together ever since. “Come check us out and see why we are different!” Spoonemore urges.

These “aren’t your grandma’s waffles,” McCarty insists — and his customers agree. Unlike most waffles that can be found around town, Liège waffles are dough-based rather than batter-based, and are made with pearl sugar. The large chunks of sugar crystallize when baked on the waffle iron, giving the outside of the waffle a slight crunch and leaving the center soft and warm.

The menu changes seasonally. During the summer, you will find a more fruit-focused lineup; during winter, they’re planning on items like the cinnamon roll icing and pecan waffle. The more popular concoctions — the bacon and maple glaze, the Nutella and banana, and the lemon curd and raspberries — will be available year-round. But if you’re a Liège waffle virgin, they advise you order your first one plain or just dusted with powdered sugar, so that you can experience the simplicity of an authentic Liège waffle.

Waffle Up kicked off its food-truck business with a grand opening at Corvus Coffee, with live music and lots of waffles. McCarty and Spoonemore hope to have similar events in the future, but in the meantime can be found on the streets of Denver five days a week.

Check their Waffle Up website for a weekly schedule, which is updated every Sunday.