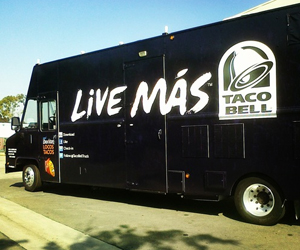 Food truck fanatics, hold on to your tongues: Fast-food giants from Sizzler to Taco Bell to Jack in the Box to Applebee’s have fully functional food trucks parading down streets across America. Some just hope to capitalize on the current food truck trend, while others predate it. Should supporters of what some might call authenticfood truck culture—the kind incubated in Portland, Oregon; Los Angeles; and other cities—be worried about these flirtations by the big-timers they already vie with every lunch hour?

An increasing number of quick-service restaurants are looking at the medium as more than just an agile promotional vehicle for products and locations—a view that could spell trouble for independents.

But, instead of being considered a threat to the carefully cultivated culture’s longevity, could the increased presence of national brands (as documented by AdWeek) just be a harmless, but telling, aftereffect of a new marketing approach’s success?

One thing’s for sure: The wild success of certain food trucks is no fluke; it’s in no small part due to a breaking from the marketing conventions of larger chains in favor of a nimble, post-ad-approved approach. Mobile or brick-and-mortar, there’s plenty for businesses small and large to learn.

Is the End Near for DIY Food Truckin’?

So will Taco Bell, in the shape of its jet-black “Live Más” truck, drink the milkshake of traveling burrito joints? The short answer: no. To compete for the same sort of customer, big brands would have to completely change their business model, to that of the successful city food trucks.

But, likewise, while the Food Network’s Great Food Truck Race may have introduced city-based food truck culture to middle America, that doesn’t necessarily mean that the model works all over. At least not yet. Before small, enterprising, nomadic restaurateurs spread across the country, their business model—what makes them popular with a certain sect of city goers—must become universal: including acceptance of locations that change from day to day have to be tracked down via social media, meals that don’t adhere to the dollar menu and lines that wrap around the lot.

All this makes for an experience that is by design unlike usual breakfast/lunch/dinner options. Meaning that for Taco Bell and other brands, launching a serious nationwide food truck business would (much as their B&M business does) essentially compete for a different dollar: the one in the pocket of the customer who frequents B&Ms but happens to be within walking distance of a truck, or one who seeks the truck out because of its special menu items or deals. So in spreading across a country they’ve already saturated, big quick-service restaurants would essentially cannibalize their B&M locations. It doesn’t make good business sense. And while we can’t say that Taco Bell’s truck wouldn’t sway some of the present-day trucks’ audience away if it were to be airlifted down (à la Taco Bell’s Alaska stunt) into a Portland, Oregon, food truck pod, the incentive for established brands to use their vehicles in large markets as anything more than mechanisms for promoting to those fan of the format just isn’t there.

Sizzler, after a failed attempt to compete in the L.A. food truck market, has shown how to make the most of the mobile medium: It uses its trucks, like the ZZ Truck, as mobile test kitchens of sorts, with which it’s able to try out new, creative meal ideas (something patrons encourage), the best of whichbecome menu items in the chain’s brick-and-mortar locations.

Let’s not forget history: The food truck dates from 1866 and the chuckwagon. While we consider food truck “culture” a relatively new phenomenon, it’s in fact a method (as opposed to B&M) of delivering food to consumers that has existed for a long time because of its lower cost (versus rent paid for a traditional shop) and mobility (particularly important in a city, since you can be in a different neighborhood every day of the week).

That said, the modern food truck is best differentiated from its predecessors by how its brand’s owners communicate with customers (via social media) and the quality of the products it serves (gourmet caliber in many cases). Mashable’s Rise of the Social Food Truck pegs the birth of this breed as 2008, in the form of trucks in New York and Los Angeles.

Mobile versus brick-and-mortar-gone-mobile aside, the modern food truck offers an excellent case study in post-advertising. Especially for the little guys, which post-advertise not as a choice but as the result of shoestring marketing budgets and the do-or-die mentality that comes with the territory. Local businesses (and national ones, for that matter) could stand to learn from the ways in which small food trucks market themselves: rapid-fire tweeting about their whereabouts, specials and upcoming events; frequent Facebook updates with tantalizing photo content; appearances at all the right occasions; exploiting their inherent element of exclusivity and rarity, which makes patrons feel part of something special, something worth bragging about online. Think about it in terms of paid advertising and typical promotional marketing (still used by each and every big quick-service restaurant brand) as opposed to low-cost word of mouth and community building via social media, aided by local content producers.

Personally, I’ve watched successful food trucks in my city (Seattle)—generally employing a combination of the best branding, social media and, of course, a unique and delicious product—graduate to a hybrid business, in which they have both food truck and B&M properties. Skillet, which has a roaming Airstream and two physical locations, is a great example.

At the end of the day, what does the food truck scene say about small business? It says that you can compete with big brands by going mobile, being smart about social media and cultivating community. The recent show of interest on the part of big chains proves that. Smart entrepreneurs use the format to keep their businesses moving and their stationary competitors on their toes. Moreover, by differentiating their product and consumer experience in every way from those of brick-and-mortar restaurants, they’ve helped give rise to a choosier (but still casual) consumer who sees chains as stale and dull.

These are differentiators—differentiators by design—that big brands can’t mimic. While the field is unpredictable and the potential future impact of chain restaurants debatable, even the biggest can learn something from these pavement-pounding businesses. The “culture” is ambiguous and hard to define, but the viability of its marketing methods is fast becoming hard to ignore.