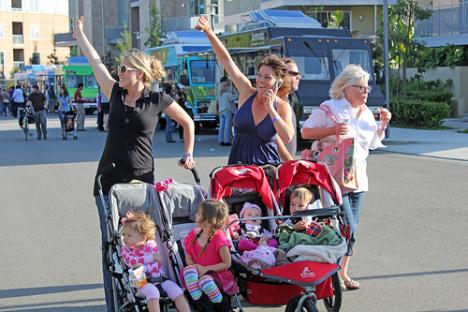 Alzheimer’s disease is known to be one of the most degenerative health issues to people over the age of 50, but there have been ways to spread awareness.

The Orange County chapter of the Alzheimer’s Association held an event dedicated to Alzheimer’s disease research at Central Park West in Irvine. The event saw over 2,000 people attending the benefit party on Thursday, April 14. Over 19 food trucks were at the occasion with cuisines ranging from Vietnamese, Filipino, barbecue, and a truck dedicated to the all-American treat, bacon.

Despite all of the fun and food present, the event also sought to bring awareness of the disease. Numerous booths from local nursing centers, hospices, and hospitals had information and brochures dedicated to the causes, symptoms, and treatments for Alzheimer’s.

“The disease is mostly age-related with symptoms appearing in people in the early-mid 60s,” Wexler said. “In that age range, there is a 10 to 12 percent chance of people getting Alzheimer’s, but it’s 50 percent for those who are in their 80s.”

For Mrs. California, United States 2011, Christy Van Der Westhuizen, Alzheimer’s disease had a personal impact on her. She chose the Alzheimer’s Association as her charity of choice due to her grandmother, who was afflicted with the disease four years ago.

“[Alzheimer’s disease] has affected me on a personal and emotional level with my family. It’s hereditary in my family and I wonder if I would be affected by the disease itself,” Van Der Westhuizen said.

Van Der Westhuizen currently works as a marketing director for sales in the Whittier Place Senior Lounge. The center is dedicated exclusively to people who succumbed to the Alzheimer’s disease and she hopes from the event that people will become more aware.

Among the activities present in the benefit party, a live DJ played the latest hits to an eager crowd. A volleyball court was set up in the area in order for people to play a game or two. Most of the activity however was dedicated to the awareness of Alzheimer’s with guest speakers talking about the disease.

Some of the upcoming events that are happening within the current year are the Memory Walks that are known to be the biggest fundraisers for Alzheimer’s research. The next Memory Walk is on May 7 at Doheny State Beach in Dana Point. The walks have been going on for 27 years and the lengths range from 2K – 5K walks.