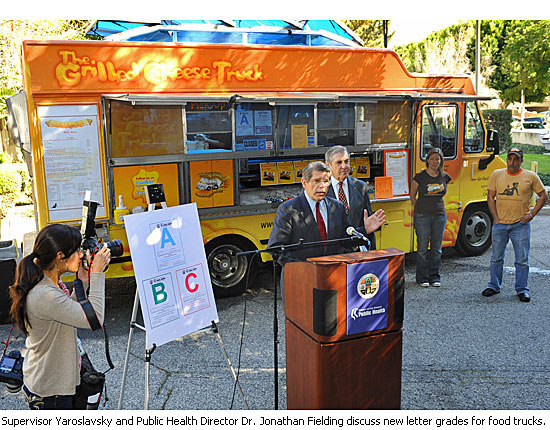 You follow them on Twitter and dine on their increasingly eclectic curbside offerings, from Cuban medianoche sandwiches to passionfruit-flavored Hawaiian shaved ice.

Now you can be the first one on the block to spot that bright new letter grade in the window.

In January, Los Angeles County’s new letter-grading system took effect for mobile food vendors with the goal of making it easy for curbside diners to find out whether their favorite truck is passing muster with the Public Health department.

Today, public health officials demonstrated what goes into an inspection, using the popular Grilled Cheese Truck as an example. (It passed with a perfect 100%.)

“Once again, Los Angeles County is at the vanguard of the food safety industry,” Supervisor Zev Yaroslavsky said in helping to kick off the demonstration.

The ordinance to extend restaurant-style letter grades to food trucks, the first of its kind in the nation, was approved by the Board of Supervisors last October.

There are currently about 6,000 permitted food trucks in the county. From their construction site and factory yard origins, the trucks in recent years have expanded to serve a new clientele hungry not just for tacos and hot dogs but also for more exotic delights like Indian snacks served “desi” (curbside) style or Asian fusion plates.

Still, one of the trucks’ major assets—mobility—had also posed a potential headache for customers wondering who owns and operates the trucks, who inspects them, and whether their food is safe to eat.

Even before the advent of letter-grading, food trucks—like other restaurants in Los Angeles County—were subject to inspection and evaluation by public health authorities. (Here’s the detailed food-truck inspection guide, and all inspection records must be made available to customers upon request or posted online here.)

County officials worked closely with the Southern California Mobile Food Vendors Association in refining the new program; here’s the list of their members. Many of them have websites, Facebook pages and Twitter feeds to keep current and potential new customers up to date on schedules and routes.

Meanwhile, as food trucks’ visibility has increased, conflicts have sometimes cropped up between the mobile facilities and brick-and-mortar restaurants.

A task force convened last fall recently offered a series of recommendations to address concerns on both sides.

At today’s demonstration, Dr. Jonathan E. Fielding, the county’s director of Public Health, said the new food truck letter-grading program builds on the public popularity of the county’s restaurant program, which went into effect in 1998.

He said the program had proven extremely effective in reducing foodborne illness in the county—a benefit that now has wheels attached.