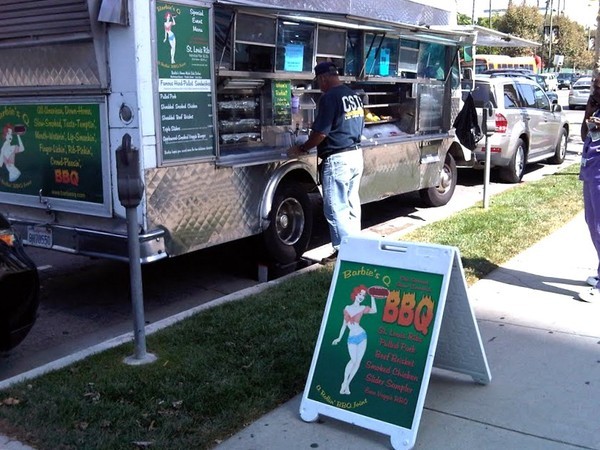 The city of Hawthorne may soon make allowances for gourmet food trucks to do business with less restrictions than those imposed on route trucks often labeled “roach coaches.”

The City Council will consider adopting an ordinance tonight that will permit gourmet food trucks to gather for hours in one location, provided they first obtain a business license and city permit.

The Municipal Code currently allows food trucks to park only for a maximum of 30 minutes at work sites. Proposed changes would require truck gatherings in private parking lots to comply with several rules to ensure that they don’t become a nuisance.

“There’s a limit at the outset – one truck for 30 parking spaces,” City Attorney Russ Miyahira said of the proposed ordinance. “They need to show an agreement with the property owners and agreement with a nearby business that patrons can use the restroom.”

Trash receptacles also would have to be provided and public safety issues addressed, Miyahira said.

The City Council first discussed changing the rules for certain food trucks last month, when residents complained that the city shut down a weekly gathering of the trucks in the Best Buy parking lot near the Rosecrans Avenue exit of the San Diego (405) Freeway. The city received a flurry of criticism on Twitter and Facebook social media websites – where fans of the gourmet food trucks follow their activities – for telling them to leave town in June.

One food truck fan posted on a Twitter page devoted to promoting a gathering of trucks in Hawthorne that they were “the best thing to happen in Hawthorne since The Beach Boys.”

Another person wrote, in response to the city’s initial refusal of the trucks: “On behalf of my fellow Hawthorne residents, we love you and disagree with the city. We’ll follow you wherever you go!”

Someone else wrote: “Why did Hawthorne ban food trucks?! That’s it, I’m moving!!!”

Several residents and food truck operators attended the July 12 City Council meeting to ask the panel to change the Municipal Code to make way for the recent trend in gourmet food trucks.

Some council members said they would support the truck gatherings but Mayor Larry Guidi expressed concern that it could hurt business at established restaurants. The council ultimately decided to allow the trucks as long as they comply with certain regulations.

“When I first got out, nobody knew what to make of a truck that wasn’t a classic route truck or taco truck. People were trying to adapt to that idea,” Bowler said.

Recently, business has been booming as Bowler and other gourmet food truck operators travel Los Angeles County to serve hoards of people. On Monday, Bowler served 150 people working on the television show “The Closer” at Raleigh Studios in Hollywood.

“A lot of people who normally go out to lunch are tired of Subway or other staples they have been utilizing for years,” Bowler said. “It offers a variety of choices and it’s all high quality food. Someone might get a pulled pork sandwich at my truck, french fries at another and dessert at another.”

Bowler said he hasn’t been to Hawthorne since he was told to leave in June. But he would gladly return if the city changes its rules.

“There is a real synergy when you put several trucks together,” he said. “It ensures there’s something for everybody to eat. It was becoming a real social gathering spot.”

What: City Council discussion of an ordinance that would allow gatherings of food trucks