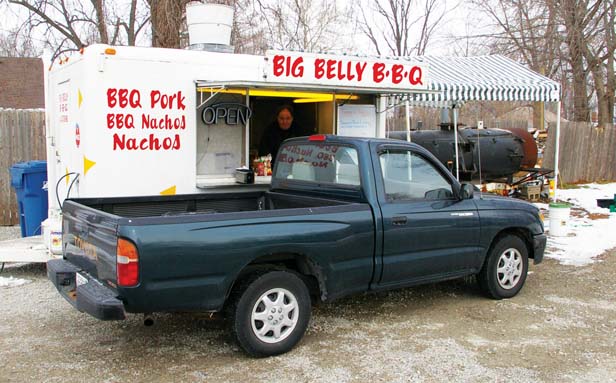 They’re almost impossible to resist: food trucks, or more properly, “mobile food concessions.” Many serve ethnic or regional specialties. Food trucks are starting to receive serious attention from the food world. In fact Roy Choi, chef of Kogi, a Korean taco truck and his food have been written up in Time and the Wall Street Journal as well as major food publications; he was one of Food and Wine’s 2010 Best New Chefs.

I wasn’t thinking about Choi as I hurried down 11th Street late one afternoon a few days before Christmas. I wasn’t thinking about food at all, just the thousand and one things I had to do. So when I glimpsed the small sign, “Big Belly Barbeque,” I slowed down to check out the place but didn’t stop, thinking I’d come back after Christmas. Then I realized I hadn’t had any lunch and barely any breakfast. I turned the car around. As I got out, I thought, “This had better be good, ’cause I don’t have time to waste on mediocre food.”

It was very good and more than worth my time. I opted for the special of the day, a smoked pork loin sandwich on a hoagie roll. It was a test of sorts: smoking can easily render lean pork loin dry as dust if not done properly. But this was juicy and flavorful, with a good smoke ring (the outer pink rim that indicates meat’s level of smokiness). The housemade barbeque sauce was spicy without being hot (hot sauces are available at the counter to add heat if desired), and a touch sweet without being cloying, the result of a secret combination of fruit juices, the genial man behind the counter told me.

There was, I learned, a vegetable beef soup special, too. I hadn’t planned on ordering it, but when the man said, “I make it with oxtails,” I ordered a cup. Oxtails aren’t tails of oxen, but beef tails. Their natural gelatin makes for an extra rich tasting broth, but removing the succulent meat from the bony pieces involves a lot of work. Just the fact that this guy would go to that trouble itself told me it would be as excellent as it was.

Tim Snodgrass, who owns and operates Big Belly BBQ, is as gregarious as he is genial; talking with him has proved to be part of what makes BBB special. By the time I left that first day, I’d learned that he gets his bread from Fazio’s Bakery, and his Italian sausages and spices from Viviano’s, both in St. Louis’ Italian Hill neighborhood; and that he lives in Carlinville.

“My parents opened The Glades in Carlinville,” he told me. “It’s a fine dining restaurant serving primarily steak. My dad originated something that’s still very popular called Rattlesnake. Marinated and breaded filet mignon pieces are fried and served with a special butter sauce called rattlesnake sauce. Area folks brag about having the recipe, but few have the original. I do, and feature it with beef and pork fritters made the way Dad first made it in the 1960s.”

Growing up in the family restaurant business made culinary school a natural choice for Snodgrass, but his other love, music, led him to abandon that for a job as a studio drummer at A&M Records in Nashville, Tenn. The next step was a degree in journalism and working in radio advertising sales, although he continued to play with “excellent musicians,” including Springfield Shaky, with whom he still plays.

Ironically, selling radio advertising led him back to cooking and began his education in the art of BBQ. “I was working in southern Illinois and got together with Mike Mills to advertise his 17th Street Bar and Grill in Murphysboro,” Snodgrass says. “We hit it off, and Mike began teaching me how to cook BBQ. He was my inspiration and mentor.”

Snodgrass couldn’t have found a better teacher. Mills and his Apple City BBQ team are internationally renowned, the only living three-time champions of Memphis’ BBQ cookoff, America’s biggest. Mills has been written up in virtually every major national food publication, as well as in others, from the New York Times to Vogue. He’s consulted on big city BBQ restaurants such as NYC’s Blue Smoke. 17th Street Bar and Grill is a do-not-miss destination restaurant for BBQ aficionados (myself included).

“Mike pointed me in the right direction,” Snodgrass says. “It took me two years of experimenting to come up with my current recipes. I gave away and threw away a lot of pulled pork and briskets while learning my own Memphis dry-rub style. I believe that meat is the star, not the spice rub or the sauce. The meat must be able to stand alone without a lot of interference. The sauce is served on the side as a compliment.”

Snodgrass has been doing BBQ catering and mobile concessions at private pig roasts, fairs, homecomings and other outdoor events for the last five years, as well as being involved in restaurants. In addition to standard BBQ items, he offers excellent chili and a variety of freshly made soups and specials such as smoked prime rib sandwiches and smoked Cajun catfish filets on Fridays. As with everything, sides are made from scratch in small batches to ensure freshness. Clients can also order customized items, such as the whole smoked prime rib roasts and turkeys that were ordered for the holidays.

In addition to Memphis-style BBQ, Snodgrass says that he specializes in “New Southern Cuisine which includes soul food, slow foods and French-inspired Cajun and Creole cooking.” Snodgrass also wants folks to know that he’s open during the winter and has a convenient drive-through. He takes phone orders for customers who have limited time for lunch and also sells BBQ by the pound.

I managed to visit BBB twice more before heading east to help take care of my new grandson; everything I tried lived up to the standard set by my first visit. The smoked turkey rice soup, chili, and bbq beans with bits of smoked pork were delicious, as were the baby back ribs and rib tips. The beef brisket was a triumph. I’ve had delicious smoked brisket and moist juicy smoked brisket, but rarely at the same time. Brisket is even trickier to get right than pork loin, yet Snodgrass’s version nailed it.

Give Big Belly Barbeque a try – I’ll bet that you enjoy it as much as I have.

Mojo is a Cuban sauce made from the juice of sour oranges (or, in this case, a mixture of orange juice and lime juice). It’s truly versatile. The sauce works as a marinade or salsa for beef, fish, pork and poultry – yes, and even hot dogs!

For the garlic mojo:

To assemble the hot dogs:

Arrange buns on plate. Top each with lettuce, then add grilled hot dog, avocado, mojo sauce, and pineapple. Serve with remaining mojo sauce on side.

Topping pulled pork sandwiches with slaw is de rigeur in certain areas of the south. Once you’ve tried it, you’ll be hooked: the bright tartness of vinegar-based slaw is the perfect foil for the richness of the pork and BBQ sauce.

This type of slaw is known by a variety of monikers such as Crispy Slaw, Freezer Slaw, Crunchy Slaw, or Sweet and Sour Slaw.

Toss the green cabbage, red cabbage and carrot in large bowl. Make the dressing in a separate bowl. Mix the ingredients, stirring until the sugar is dissolved. Start by adding one cup of dressing to the bowl with the cabbage and carrots. Toss to combine. Keep adding dressing a little at a time, but do not drench the cabbage. You may not need all of the dressing. Keep covered in the refrigerator. The red cabbage will turn this slaw purple after a few days.

If you boil the dressing and let it cool before making the slaw, you can freeze this slaw for up to two months.

Another use for the dressing is Marinated Vegetables.

Prepare a medley of fresh vegetables like red and green bell pepper slices, carrot sticks, sliced red onion, fresh mushrooms, large black or green olives (optional), fresh pea pods, broccoli and/or cauliflower florets or any other fresh vegetable you like. Pour the dressing over the vegetables and let marinate for four hours or overnight. Serve as a side dish.