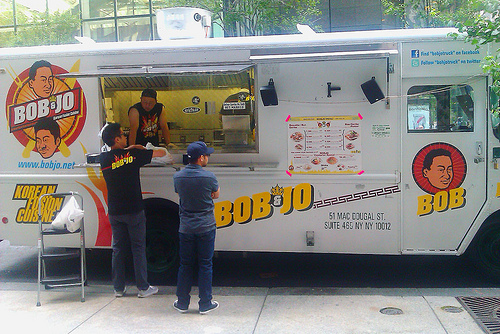 Korean Food USA is a new series that showcases Korean and Korean-inspired eateries all around the nation.

We’re always on the lookout for the best and tastiest new options in the world of Korean cuisine, and NYC has delivered, yet again. Korean food trucks are not a exactly a new phenomenon, but the latest to join the ranks offers some serious competition for the likes of Korilla BBQ and Kimchi Taco. The fare is what founders Bob and Jo describe as “korean fusion cuisine”: baguette sandwiches with your choice of chicken, bulgogi, or kalbi, complete with sweet and sour radish and carrot kimchi, all toasted to perfection.

For those with a more traditional palate, there is a combo platter (any choice of meat) served with rice. Vegetarians need not beware, as there is also bibimbap bowl with four sauce options, and japchae with fresh peppers, onions, spinach, and shiitake mushroom.

Launched on July 14, the truck is not even a week old, yet people are clamoring for its delicious food.