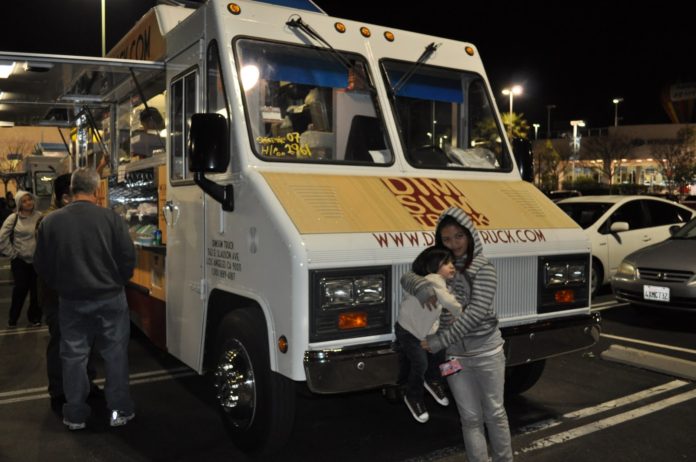 I enjoy dim sum, but sometimes I am not in the mood for the hustle and bustle of a busy Chinese restaurant. Dim sum usually ends at 2 pm and restaurants are pretty crowded if you don’t get there fairly early in the morning. Being able to eat dim sum any time during the day? FINALLY…I was excited to hear that there was such a truck.

I ordered what I would normally order at my favorite dim sum restaurant, baked bbq buns, shrimp shu mai and egg custard tarts. I also got their duck taco.

I took a bite out of their shrimp shu mai.  The skin was a little rubbery. The filling tasted more fishy than like pork and shrimp. It tasted better after dipping it in the sauce that it comes with. It tasted as if they were cooked, put in the refrigerator and heated in the microwave. Although this wasn’t that great, it was probably the best of all the items I got.

Next was the bake bbq buns. I took a bite, and the bread was crispy. Its texture was as if it was placed in a toaster oven. It wasn’t soft and steamy. Usually when I order this, I see a glaze on top of the bread that makes it a little sweet and makes it look shiny. This pork bun didn’t have that. The bbq pork filling  was scant and not very tasty.  The sauce was on the watery side and there wasn’t much flavor. I was really disappointed as this is my favorite thing to eat at a dim sum restaurant.

The Peking duck taco is not an ordinary dim sum item, but I love duck so I had to try this. The duck was dry and tasted overcooked. Like the skin of the chicken, duck skin tastes its best when it is crispy. But with me, unlike chicken, I can eat duck skin soft. In this taco, the duck skin was soft but it didn’t have any fat underneath the skin so to me it wasn’t as flavorful as it could have been. The sauce had good flavor but the problem was if there was no sauce, the duck taco wouldn’t have had flavor. I would’ve liked to have been able to enjoy it with the duck being the star.

On to the egg custard. Looking at the picture, it doesn’t seem appealing. Eating it, well, it was I suspected. There was way too much crust and not enough filling. The crust wasn’t buttery or flaky and tasted a little stale. The top of custard didn’t have it’s normal sheen. It was like the custard curdled. The flavor of the custard was ok.  The entire thing just seemed way too overbaked.

Overall, I was a  diasppointed with most of  the items I got. The idea of the truck is genius, the execution and authenticity of the  flavors of the dishes, not so much. The service was good, the guys who ran the truck were really nice, but I would have to pass on this truck next time.