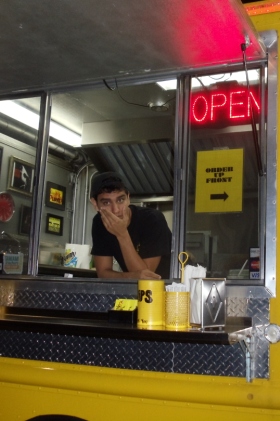 There may be more and bigger problems ahead for food trucks.

The trucks cannot legally roll down the street and serve up lunch at a busy corner, says Hilda Castillo, a spokesperson at the Miami-Dade County Department of Planning and Zoning. “Food trucks are not permitted to conduct sales on the public right-of-way,” she says. Indeed, according to Miami-Dade.gov, a right-of-way “includes all of the public area that starts from the edge of private property. It includes, but is not limited to, road medians, sidewalks, areas where there are utility poles, and the grassy area (swale) where you park in front of a house . (Sec. 2-103.1).”

Then there are the roundups, which are also illegal without a permit, according to Castillo.​

For the past few weeks, some of these have been either canceled or moved due to compliance issues. Almost every roundup is in a different city and subject to different rules, which is why some some roundup locations are secure and some seem to be up in the air.

In unincorporated Miami Dade — which includes Kendall and much of Southwest Dade as well as pockets throughout the county — gatherings so far have basically been held illegally, says Castillo. There are currently no specific provisions in the zoning codes to allow for food truck roundups. The county is placing them under the provisions of the codes which address short term carnivals and circuses. Castillo did acknowledge that several regulations in that code are not directly applicable to the trucks and that zoning staff was working on a draft ordinance that would provide specific provisions for these events.

It appears that many of these mobile food courts have been held under the assumption that if truck operators have permission of property owners, all is well. According to Castillo even if a property owner grants permission to these truckers, several permits must be pulled including a building permit application for short term use, professional certification for a short term event, and a certificate of use for a short term event. In addition, a Miami-Dade Police Department permit may also be required.

The cost of doing business with Miami-Dade? Around $700 per event is the figure given to New Times by Kevin Gleizes, organizer of the Tamiami Truckers Food Court and owner of Caza Crepes. “I would pay the city $135, not $700,” said Gleizes. That’s all well and good, but counties don’t negotiate fees.

Tamiami Truckers at Lexus of West Kendall and West Kendall Toyota, was the largest weekly event, attracting thousands of attendees before the county issued code violations and shut it down, forcing the rolling restaurants to scramble for a weekly place to squat without a permit.