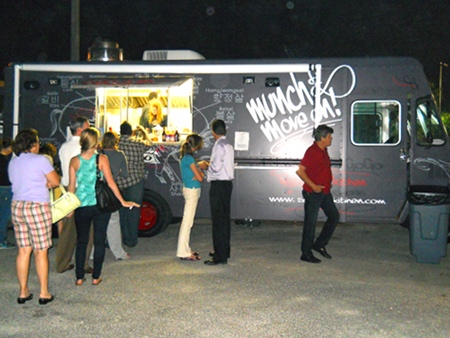 Since opening Sakaya Kitchen in December 2009, chef/entrepreneur Richard Hales has made quite a name for himself. The restaurant won numerous awards and accolades including Best Healthful Fast Food by New Times and one of the “Top six places to try new Asian fusion” by Bon Appétit.

When the food truck craze was still in its infancy, Hales was one of the first on the scene with his Dim Ssäm à Gogo truck. Serving portable takes on his Sakaya Kitchen menu, Dim Ssäm à Gogo quickly became a favorite, where people wait in long lines for the Korean-influenced fast fare.

Fueled by the success of Dim Ssäm, Hales debuted Sakaya Kitchen à Gogo in March. This second truck was designed to service multiple food truck roundups and for mobile catering. The concept was basically the same as his flagship truck and the brick-and-mortar restaurant — Asian fusion cuisine on the go.

Hales has now announced two completely different concepts from his successful Asian-flavored endeavors, with two new food trucks rolling out on the horizon, The Baketress and Burger Cheese Bun.

The Baketress Dessert Truck will feature fresh baked pies, soft serve ice cream, and home-made takes on ice cream truck favorites, like sandwiches and other novelties. Most intriguing is the made-to-order “hot now” doughnuts he plans to serve on the truck.

Cold-brewed coffee from Panther Coffee of Wynwood will be served on the truck.

Burger Cheese Bun will feature all-American favorite items like burgers, hot dogs, melts, fries and drinks. The concept grew from Hales’s success with his Bulgogi Burger. The hamburger meat, made from a blend of sirloin, brisket and oxtail, will be ground daily in-house. Burgers and dogs will be served on Martin potato rolls and the black bread used for melts will be baked in-house. Twice-fried French fries will be offered with a choice of sea salt, Parmesan/black truffle or cheese toppings. Organic iced teas, fresh lemonade, and Mexican Coke and Pepsi will be served.

Burger Cheese Bun will replace the Sakaya Kitchen a gogo truck, bringing Hales’s food truck grand total to three. Baketress and Burger Cheese Bun will bring Hales in direct competition with current dessert and burger food trucks, but we’re sure Hales has more than a few surprises up his sleeve. Stay tuned for full menus and debut dates, as they’re announced.