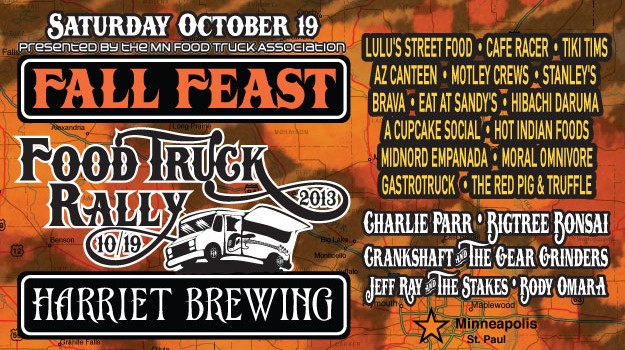 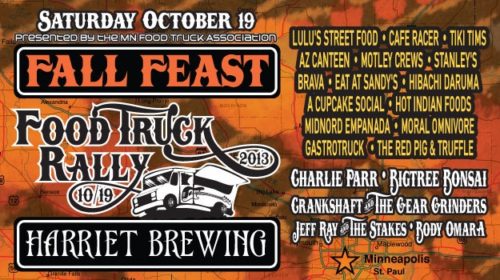 After the success of their first event in July, the Minnesota Food Truck Association (MFTA) (www.mnfoodtruckassociation.org) is once again gathering its truck members for a food truck rally. On Saturday, October 19th, from 12:00pm to 7:00pm, 15 food trucks will unite for a fall feast at Harriet Brewing Company at 3036 Minnehaha Avenue, Minneapolis MN.

The following MFTA food trucks will serve their gourmet mobile food specialties at the brewery along with live entertainment and locally brewed craft beer. The Fall Feast Food Truck Rally is a FREE event for all ages. Attendees must be 21 years of age to obtain a wristband for alcohol consumption.

Crankshaft & The Gear Grinders: 6pm
Crankshaft has been pounding the pavement since 2008, developing his own “pork neck” style along the way. A sound heavily rooted in blues, country, swing, rock ‘n’ roll and surf that “could not have been imagined prior to the early punk scene,” as described by Dig In Magazine. Rock solid original lyrics, a dedicated fan base, and his 21st century twist on the American roots is pushing him to the top of the crowded Minneapolis music scene in a hurry. It’s becoming clear to many that Crankshaft is “one of the best and most interesting roots, rock and blues acts playing around town these days.” – Cities 97. (site)

Jeff Ray & The Stakes: 4pm
Jeff Ray, his steel resonator guitar and a foot-stomping board is all you’ll hear when the St. Paul musician plays live and on his latest CD ‘Last Great Winter.’ And that’s all you’ll need. (site)

Body Omara: 12pm
Body Omara is a Twin Cities based trio that performs original compositions combining African influences with jazz sensibilities. What emerges is a sound you can’t hear anywhere else.  (site)

A portion of the proceeds from this event will be donated to Cedar Cultural Center to support music in the Cedar-Riverside neighborhood.

The Fall Feast Food Truck Rally is a one-day-only event and will take place rain or shine. Parking is available behind Harriet Brewing Company and on the streets surrounding the brewery. For more details, including a full list of the participating food trucks, visit the website at www.mnfoodtruckassociation.org or follow us on Twitter @FoodTrucksMN

The Minnesota Food Truck Association is a non-profit organization made up of over 55 MN food trucks, it is a resource that provides open communication throughout the mobile food industry and spotlights the diversity of the culinary landscape through education, advocacy, and community outreach.