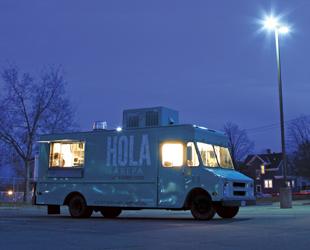 It’s winter in Minnesota, which means just about everyone and everything has abandoned our frigid streets. Downtown workers scurry through the skyways, snowbirds wake up in warmth, and I can only assume the food trucks have decamped  to Arizona or Florida.

“The truck doesn’t fly south, but we do,” says Christina Nguyen, who co-owns Hola Arepawith Birk Gruden. Last year, the two went to Central and South America and brought back flavors from Peru and Nicaragua. (Did you try the vigorón? It’s incredible!) The 2013 arepas may have an Asian flair, as Nguyen and Gruden plan to visit Thailand, Laos, Vietnam, and possibly Indonesia. The truck, unfortunately, doesn’t get to come along: it’s parked 45 minutes north of the Twin Cities, on a farm where different vehicles are winterized and stored.

Vellee Deli is also wintering in a warehouse while its owners plan for next season.

“We did consider taking the truck to Florida,” says Vellee co-owner Will Xiong. “But the logistics of finding a commercial kitchen, locating inventory, and learning new city ordinances made it more it burdensome than we were willing to deal with.”

Meanwhile, Foxy Falafel now has a year-round restaurant in St. Paul. Chef Shack is cooking weekend dinners and Sunday brunches at a new bricks-and-mortar shop in Bay City, Wisconsin. AndWorld Street Kitchen, from Saffron’s Sameh and Saed Wadi, just opened its own Uptown Minneapolis storefront to keep the Bangkok Burritos and Yum Yum Rice Bowls coming through the off season. The physical truck won’t be at the restaurant this winter—“It’s parked in a secret place, on a farm,” Sameh says—but reminders of the truck literally cover the restaurant, in the form of close-up photos of the bright-red vehicle. The food-truck prices came inside, too, with almost everything priced at less than $10.

A few hearty trucks stay on the streets, despite the falling temps. Stephen Trojahn’s Gastrotruckplans to do about four or five functions or lunches a week, parking at various metro-area office complexes. “We have electric blankets for the propane tanks, as last year we found that the cold really affects the pressure,” explains the truck’s co-owner, Catherine Eckert. “We even have a warming tent for people to stand under if they want to wait outside for their food,” she says.

Look for me there, bundled and hungry!