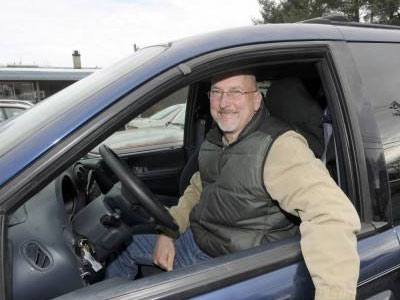 NORTH ATTLEBORO – A hot dog vendor whose mobile food cart was shut down this winter because of a zoning violation has decided to close up shop for good.

He was among several owners of mobile food carts who received notification from the building inspector this winter that the town’s zoning bylaws do not allow carts to set up shop in permanent locations.

Jergens last week thanked the board of selectmen and the board of health for their assistance, but said he doesn’t plan to reopen.

“I’d like to express my gratitude to the town for allowing me to operate as long as they did. I’d love to come back and operate again,” he said. “Unfortunately, I’ve been unable to resolve a zoning issue and I don’t have the resources to pursue it.” Building Inspector Rod Palmer issued cease-and-desist orders to the owners of mobile carts last winter after learning there are no provisions for them in the town’s zoning bylaws. The issue arose when a Norton woman came into the office to inquire about opening a hot dog stand on Route 1 in front of Noble Hardware.

Palmer looked through the zoning regulations and found that vending carts are not listed as a permitted use. If a use is not specifically mentioned in the zoning bylaw, then it is considered to be prohibited.

Other businesses that received the orders were the Rolling Stove, which had been operating on John Dietsch Boulevard, and Del’s Lemonade, which operates carts during the summer.

Cart owners can apply for a variance from the zoning board, which would cost about $400, but Jergens does not plan to do so.

Palmer is in the process of researching changes that could be made to the zoning bylaw so that mobile food carts are allowed in some areas.

“I’m in the infancy stages, but I’m going to make every effort to put together a bylaw proposal as soon as possible,” Palmer said. “I’m doing some research so we can find a home for some of these food vendors and come up with a reasonable bylaw.”

Provisions of the bylaw, such as how many mobile food carts would be allowed and where they could be placed still need to be determined, Palmer said.

Jergens said if the town resolves the issue, he would be interested in returning with his cart.