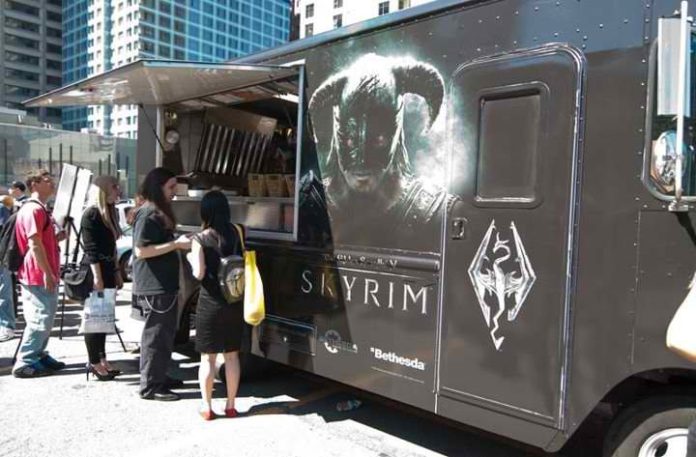 As an avid convention-goer, I’ve found that nothing is better then seeing panels, looking at awesome collectables, and getting free food. Bethesda, creators of Elder Scrolls Online, obviously agrees and is sending its official Elder Scrolls Online food truck all over America to different conventions and events.

The point of the food truck is not only to feed hungry convention goers, though that would reason enough, but to get people excited about the forthcoming Elder Scrolls Online MMORPG to unite and have a good time. Fans can hang out by the truck, eat, talk about their hobby and maybe make some friends who’ll join them for Elder Scrolls Online adventures. Those who get there early enough may also win some free Elder Scrolls stuff!

The first stop for the Elder Scrolls Online food truck is the The South by Southwest (SXSW) music tour in Austin Texas on Sunday, March 10 2013. The truck will be available from 11:30 a.m. – 3 p.m. CST.  If you come at 12pm though, you can see a special guest performance by Malukah. She’s famous for her rendition of the “The Dragonborn Comes” from Skyrim.

If you don’t live near Austin, don’t worry, because the truck is making several more stops in America (and soon to be announced Europe stops.) Here is the complete list of the 2013 tour which you can see here at Elder Scrolls Online.com as well as other information.

As for the game, The Elder Scrolls Online will be released later in 2013. Bethesda has yet to announce an official release date.