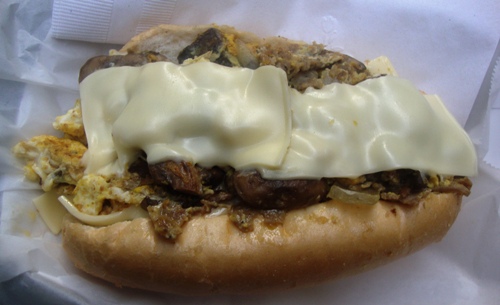 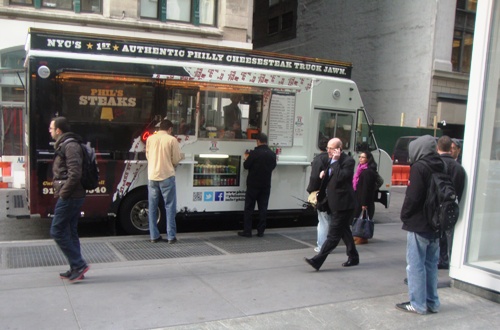 There are a number of ways to expand a food truck business. Many have taken the crossover path, opening a brick and mortar establishment.

Others, such as Phil’s Steaks, the Vendy Awards Rookie of the Year in 2012, have opened a 2nd truck. Now they have Big Jawn and Lil’ Jawn.

You can get the most of the cheesesteak and eggs sandwiches for under $5, under $3 if you just want eggs and cheese. We wanted meat and mushrooms too, so it ended up costing $5.75. 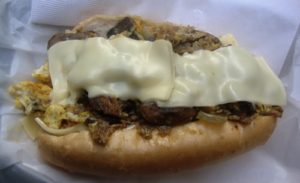 Without a lot of room on food trucks for storage, they basically use the same ingredients for breakfast as lunch, with the addition of eggs, bacon and sausage to the menu.

But you can get eggs and bacon or sausage anywhere. You need to come to Phil’s for cheesesteak and eggs, which plenty of people seem to be doing.

They found a nice spot for the truck on 41st St just west of 6th Ave, and while there was no line, there was a steady stream of people coming up to the truck for breakfast.

There’s also a nice outdoor plaza at that spot with tables and chairs, which we used to eat breakfast and take some photos. 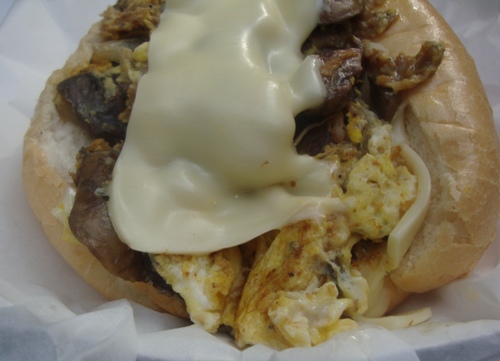 What can we say? This was a delicious Phil’s cheesesteak, with the usual steak, cheese and onions on an Amoroso roll…with eggs!

It would have cost under $5 if we didn’t add in mushrooms. How can you go wrong? They even have a veggie option for those so inclined.

Phil’s has been serving breakfast most days on 41st St just west of 6th Ave, as well as down in the Financial District.

For 1 or 2 days a week, they park somewhere else in midtown for breakfast. You best bet is to find them on twitter here or on our Mobile Munchies twitter feed.

We can’t eat cheesesteak and eggs every day for breakfast, but we can certainly make a case for at least once a week!