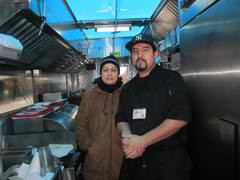 Among the many vehicles from all five boroughs selling their fare, one taco truck stood tallest as New York City’s most popular food trucks and vendors gathered on Governor’s Island Saturday for the 7th Annual Vendy Awards, which celebrate the art of street eating.

This year, Paty’s Taco Truck was awarded the Vendys’ inaugural award for “Most Heroic Vendor.”

While selling tacos and hot dogs might not immediately conjure images of acts of bravery, the past few years have proven that New York food vendors are vigilant and, yes, heroic. The most famous example are the hot dog vendors who last year spotted and alerted the authorities to a car bomb in Times Square.

This year, the Vendys decided to honor Alberto Loera, the 29-year-old co-founder of the popular Paty’s Taco Truck, which sells chorizo burritos and tacos. Loera has become the de facto poster boy for vendors in their war with the city of New York, which has started cracking down on food trucks.

Paty’s Taco Truck has been towed multiple times and given countless tickets by the NYPD for parking on metered spots and selling “merchandise.” Loera and his lawyers argue that the truck, which has all its permits and licenses, doesn’t sell merchandise, it sells food — a key legal difference.

The conflict escalated when, last Nov. 30, Loera was arrested and his truck was towed, again for selling merchandise on a metered spot. When Loera recovered the truck, he says it had been completely gutted.

“It was like they just cleaned the truck out: no dishes, no generator, no gas tank, no tools, nothing!” Loera told TODAY.com. But undeterred, he and his family borrowed money from relatives in Mexico in order to get the truck back on its feet again.

“I’m not a criminal: I don’t sell drugs, I sell food,” Loera told TODAY.com. “I’m a father of three and I need to bring food to my family, and this is what I know how to do best: cook food. So that’s how I make money for my children.”

Loera and his lawyers from the Street Vendors Project decided to take the matter to court and sue the city of New York — a case they lost.

Though he didn’t win, Loera was honored for his perseverance and determination to fight for his right to legally sell food.

“It meant a lot,” he says of the Vendy Award. “It meant that the fight wasn’t for nothing. It was for a good cause, not only for me, but for other vendors. Vendors that don’t speak English, vendors that get an unfair ticket and pay it and don’t fight back because they’re scared.”

Loera and the Street Vendors Project are in the process of appealing the suit against the city. In the meantime, Loera can be found doing what he loves best: still on 86th and Lexington after 7 p.m., selling tacos.