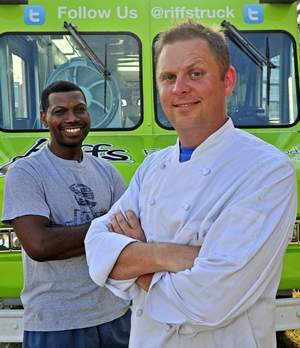 In all the grandstanding over the questions surrounding Nashville’s food trucks — Where should they park? Do they threaten restaurants? Who should oversee them? — one basic query seems to have been drowned out in the noise:

In the end, the answer to that fundamental question — more than permits, codes and regulations — will determine the fate of food trucks, albeit on a case-by-case basis. After all, if the meals coming out of these culinary caravans aren’t worth eating, it’s hardly worth haggling over parking permits. The dining public has an uncanny ability to dictate who gets to stick around, without the hassle of paperwork.

In the case of Riffs Fine Street Food, the answer to the $64,000 question is simply this: “The food is outstanding.”

And that’s not just grading on a curve, as in “pretty good for food made in a motorized vehicle.” Riffs is excellent by any standard, as in “panzanella and seared salmon worthy of white tablecloths and candlelight.”

Of course, there wasn’t a tablecloth in sight when we sampled Riffs’ repertoire in the MetroCenter parking lot of Second Harvest Food Bank. There were just hundreds of curious diners, queuing up for a taste of Nashville’s newest culinary phenomenon, Food Truck Tuesday.

Modeled on the weekly congregations of mobile vendors in locations such as Chicago and Los Angeles, Nashville’s Food Truck Tuesday is the brainchild of Riffs co-owner B.J. Lofback, who has emerged as an outspoken leader of the mobile vendor community as it seeks to find its place in the city’s growing culinary landscape. It occurred to the former Internet marketing specialist that while food trucks need a place to park, Second Harvest has a big parking lot. If trucks congregated at the nonprofit campus and donated 10 percent of the day’s proceeds to help fight hunger, everyone would benefit, and patrons would have the added convenience of seating inside Second Harvest’s culinary arts center. “When I think of how all this came together, it brings tears to my eyes,” Lofback says.

On a recent Tuesday, Riffs joined a convoy that included The Grilled Cheeserie, Happy Eating Japanese food and Maggie Moo’s ice cream, parked along a grassy strip outside the culinary arts center. Lofback and business partner Carlos Davis, a veteran of the kitchen at Loews Hotel, maintained steady composure as the lunch crowd surged, churning out a tightly edited menu of consistently excellent items, with culinary influences ranging from Asia to the Caribbean.

Davis, a native of Barbados, seasons many items with a proprietary jerk seasoning composed of thyme, papaya, Scotch bonnet peppers and a dozen or so additional ingredients. The secret blend makes frequent appearances in items such as jerk chicken — a Riffs staple — and the Caribbean burger. Upon seeing the latter, one diner in my group declined to taste it because he said it resembled a singed briquette. On the contrary, the blackened crust of herbs and spices opened to reveal a juicy core infused with a tropical medley of sweet heat. Sandwiched on a fluffy sesame bun, with a disk of grilled pineapple, caramelized onions and a schmear of papaya ketchup, the generous burger was a graceful merger of beach flavors and backyard barbecue.

Thai noodle salad spilled generously over the top of its paper boat. The bountiful tangle tossed with peanut-sesame sauce, broccoli florets, julienned carrots, scallions, red pepper and baby corn was an ample vegetarian meal, and could be upgraded with grilled chicken or salmon. While we ordered chicken, we received salmon by mistake, but with such excellent fish — lacquered with a sweet soy sauce whose crisp caramelized glaze gave way to a perfectly rare and flakey interior — we could hardly complain about the mix-up. (That said, it is worth double-checking your order as you retrieve it from the window. Things can get pretty crazy in the lunch rush.)

Mac-and-cheese distinguished itself in the ubiquitous yellow-noodle genre. Made with penne and a blend of six cheeses, including some varietals from local Kenny’s Farmhouse, the casserole was baked with panko breadcrumbs, which resulted in a texture reminiscent of the chewy edges on a pan of brownies.

Panzanella was the clear standout among our orders. Lofback and Davis’ spin on Italian bread salad tossed cubes of fresh sweet cornbread — baked in the early morning at Riffs’ commissary — with a medley of cucumbers, tomatoes, hunks of herbed cheese, roasted zucchini, summer squash and peppers, and fresh herbs. The marriage of smooth and crumbly textures and cool and warm temperatures, made a colorful and generous summer salad, which served as a gorgeous bed for the glazed salmon — all for $8.

But don’t get too attached to a favorite dish, because you never know what might appear on Riffs’ ever-changing roster. Some days it’s fish tacos and grilled peaches, other days it’s Korean barbecue. After all, the name refers to Lofback’s interest in guitar and the fact that he and Davis are “just two guys jammin’ in the kitchen.” You never know what they might come up with.

Furthermore, be prepared to change your order in an instant as the crowds deplete limited inventories and items get erased from the menu board. We barely got our order in under the wire before watermelon lemonade, a bright citrus agua fresca, got wiped away, leaving only a gorgeous floral Thai tea infused with sweetened condensed milk.

Then again, the fleeting, flexible nature of food trucks is part of their appeal. They can show up where people are hungry and serve until the food runs out, then start again another day with another menu in another location. If people didn’t like the system, food trucks wouldn’t be as popular as they are proving to be. And the city wouldn’t be facing so many questions about how to integrate mobile vendors into the conventional dining landscape.

Questions of regulation will be answered over the coming weeks, as city officials, mobile vendors and restaurateurs hash out a set of rules that everyone can live with. But in the near term, the important question is this: Where can I find Riffs Fine Street Food today? That’s an easy one. Twitter can feed you the answer.