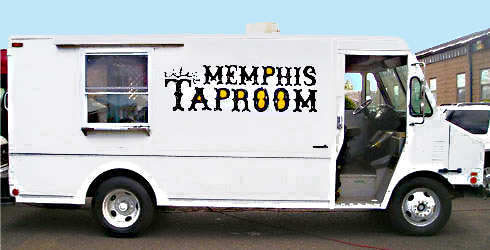 Our parents always told us to stay clear of hanging out in disused lots in Fishtown, but, hey, we were never one to listen to sound advice (hence the bad tattoo we got as a cub during spring break.) And now, thanks to the savvy minds behind Memphis Taproom, we have a new reason to drink and carouse with friends under the open sky in a once vacant lot. Memphis Taproom is set to open up their brand new beer garden today to much fanfare.

Reminiscent of Brooklyn’s local beer garden, Union Pool, Memphis Taproom’s open-air watering hole will also be affixed with a similar permanent food truck vending hot dogs to match up with the craft beer pouring from the taps. The mint-green hot dog truck will serve up an 11-strong hot dog list with toppings from the usual sauerkraut and onions on the Bigos Bambu to the atypical nori and pickled ginger on its Carlifonia Uber Alles. The Taproom’s beer-battered kosher dills and its vegan options are, of course, present as well.

The beer garden’s tricks don’t just stop at craft beers and dog’s. A newly installed projection screen will be on hand to show Phillie’s games all the way through October, seven days a week (come on, Fightin’s.) Oh, and just to say it (because everyone is thinking it), Memphis is getting the jump on Stephen Starr’s own take on the beer garden by a few weeks.