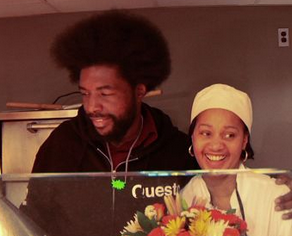 It’s that time of year again, when folks come out of the woodwork to tell us what foods will be trendy next year. And while the majority of 2010’s prognosticators put their money on pie being huge in 2011, that never really took hold. Despite the futility of such soothsaying, Questlove, the mighty, Afroed drummer and band leader of the Roots, is coming forward now to hip us to what he says will be the “new cupcake.”

Questo says the next big thing will be (drum roll, please …) fried chicken. That’s what he told AdWeek, anyway. Of course, he was actually trying to sell people on his new line of Quest Loves Food fried chicken drumsticks.

While rehashing his dream of owning a fleet of soul-food trucks that would cater to crowds at festivals like Coachella and Bonnaroo, Quest said “food trucks are the new black. And I’m trying to prove that fried chicken is the new cupcakes.” Okay, then.