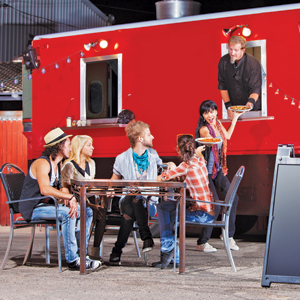 Hardcore foodies in the Inland Empire will be happy to learn that gourmet grilled cheese sandwiches, sweet and savory cupcakes, Asian style grilled meat tacos and southern smoked BBQ, among many other foods are about to go mobile. On December 10, the Riverside County Board of Supervisors approved an ordinance that will allow food trucks to operate within county limits. The board voted to abolish the ban on food trucks, which were only allowed with permits for special events.

The ordinance will go into effect April 8, 2014, and according to spokesperson Raymond Smith, it will put in place some of the strictest health guidelines in the state. Smith said some critics had concerns about certain older food trucks, which were not up to safety standards. He said for the most part, only post-2009 food trucks will be allowed.

“The ordinance specifically allows for reasonable time, place and manner restrictions, which cities in Riverside County may put in place if they wish,” read a recent press release on the ordinance. Smith said it also allows IE cities an option to pass their own ordinances to deal with safety issues, parking zoning requirements and other issues food trucks might possibly bring with them. Riverside County will also consider its own limitations in unincorporated areas like in school zones and Wine Country at a meeting in the near future Smith told the Weekly. He said that one of the ordinances was proposed by First District Supervisor Kevin Jeffries, who contends that along with a variety of tasty options for lunch and dinner, the food trucks will stimulate the local economy.

“I fought to reform Riverside County’s food truck rules because I found them to be a good example of how government has stifled small businesses and potential job creation,” said Jeffries, in a recent county press release. “With the help of the county Department of Environmental Health, I believe we have crafted an ordinance that will protect public health and public safety, provide new opportunities for jobs, and offer more food choices to our constituents while avoiding significant impacts on existing businesses.”

Another proponent of the ordinance is Keith Kahn, who has been in the food truck/catering end of the service industry for three decades. Kahn is president of IE Gourmet Food Trucks, a company that promotes and organizes food truck events within the Inland Empire.

“I think this will definitely help our local economy. My focus has been entirely in the Inland Empire,” Khan said. “I’m confident that once Riverside County opens up, many food trucks will launch brand new trucks in the IE or convert their trucks to service the area or move to the area full-time. “

Kahn said the revenue generated could only be a good thing for our struggling economy. “These trucks will hire their workers locally, buy their supplies local and stay local to Riverside County,” he told the Weekly. “Many of up-and-coming restaurants actually began as food trucks. This will only boost our economy. Plus, I’m excited because Riverside County was literally the last county in California to enact an ordinance allowing food trucks.”

Some critics of the ordinance all along have claimed that the food trucks could potentially take away business from restaurants already fighting for business. But Kahn said that competition doesn’t have to be a negative consequence. “I’m a firm believer in the open market. People will eat where they are going to eat,” he said. “Restaurants have advantages that food trucks will never compete with such as climate controls, comfortable seating and alcoholic beverages; and of course, it is true, food trucks are in a sense, competitors to restaurants, but I do firmly believe there can be enough business for everyone.”

Kahn said that the ordinance would require that all food trucks adhere to a set of strict health and safety standards. “I’ve been in the food service industry for 30 years, and can tell you with no question, the health department is on top of their game,” Kahn said. “I have no doubt they will fairly and efficiently regulate food trucks just as they do regular restaurants, hot dog stands, and so on.”