By Ryan Felton  |  The Oakland Press 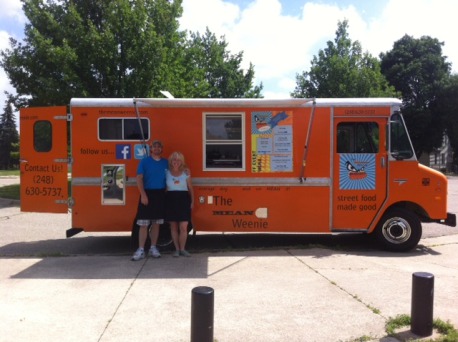 Don’t be alarmed if a boxy orange vehicle sporting a “mean” looking hot dog decal passes you on the road sometime soon.

Sitting inside that vintage truck are Chris Matthews and Tracy Antenucci, a Rochester couple who recently entered Southeast Michigan’s growing food truck market as proprietors of The Mean Weenie — their gourmet spin on the hot dog.

And they’re having the time of their life so far.

“It’s been nice with (other) food trucks embracing us in the community,” Antenucci, 44, said.

Their story actually began 1,000 miles away: Arlington, Texas, where the two first met when both were 9 years old and living in the Lone Star State. It wasn’t hard to come across one another, either — they grew up in homes separated by only a property line.

“I was literally the girl next door,” Antenucci said.

They kept in touch, even after Antenucci moved to Michigan two decades ago. Eventually, things just sort of panned out. Last year, Matthews, also 44, headed north and reconnected with his lifelong acquaintance. As he put it: “I came and got the girl.”

Both were intrigued by the growing national response to food trucks, from television shows on The Food Network to morning show anchors highlighting the dining experience.

The noticeable presence of food trucks in southeast Michigan occurred only within the last couple of years.

Thanks to a growing number of food truck rallies and municipalities being more receptive to the concept, the number of restaurants on wheels has exponentially grown.

Rochester first experienced food trucks this May when the 2013 Deck Art event invited a half-dozen merchants to sell food at the intersection of Fourth and Main streets.

In March, the couple began to transition away from their jobs — Antenucci in marketing, Matthews at the Rochester Chop House — and purchased their vintage 1978 Grumman Kurbmaster vehicle, in preparation to enter the world of curbside dining full-time.

“I really wanted to go back into doing food,” Antennuci said.

She said she designed the menu, which runs the gamut of hot dog possibilities with catchy, memorable titles. There’s “The Keen Weenie,” a hot dog with apple cider-braised leeks and bourbon mustard; the “Wasabi-ach?” a hoisin-glazed hot dog with wasabi ginger cole slaw; and a Greek-themed hot dog that includes black olive relish, feta cheese, red onions and cucumbers.

Matthews said he conjured up the memorable name. They used contacts from friends to put together the design of the vehicle and the logo.

The couple wake up each morning and head to their commissary in Madison Heights for the day’s necessary ingredients, which they proudly boast as being mostly Michigan-made staples, including Faygo pop and Better Made potato chips.

Creating a specialized spin on a classic food served two purposes. In particular, The Mean Weenie fills a niche. And, Antennuci said, “People have much more discriminating tastes than they’ve had before.”

Vegetarians have reason to be interested, too. A meatless hot dog can be purchased with any ingredients, 90 percent of which Antennuci said is vegetarian friendly.

Antenucci said they’d like to expand outside food rallies and events. They’re glad to work corporate events and birthday parties for children.

Parents can be assured a child’s typically less-developed palette will be catered to, as well. The menu also includes a plain hot dog and a dish of macaroni and cheese.

Anyone looking for insight as to what to expect from Antennuci’s and Matthews’ culinary experience can look no further than the tagline located on the menu.