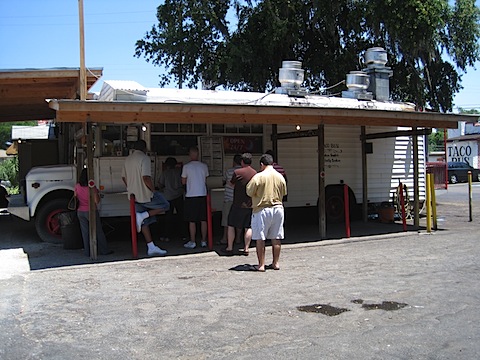 This afternoon I had the pleasure of visiting a Tampa institution – The Taco Bus!

The Taco Bus used to be a mobile food truck that traveled around Tampa, offering lunch services at various office buildings and events in the area, but a few years ago the bus settled off of Hillsborough Ave. They may have a permanent spot now with attached seating and AC, but everything is still cooked fresh inside the bus.

A couple of months ago Man v Food came to Tampa to film a segment at the Taco Bus. It’s a local favorite and I’ve been told by several people (including Derek) that it was a must try.

I know the Food Truck movement is HUGE across the U.S. right now, but that doesn’t stop me from being a little wary about enjoying Mexican food out of a converted bus. There was no doubt the food would be good, my fear was what may come after the food umm ‘digested’ itself. ifyouknowwhatImean

Still, when we arrived I found myself oddly excited to try something new. The menu was great. Tacos, burritos, quesadillas, etc. a little something for everyone – even a few vegetarian options!

Derek and I placed our order than found a seat in the attached awning.

We had just enough time to snap a couple of silly photos before our number was called.

Wow. This wasn’t greasy Mexican food at all! This was fresh, delicious Mexican food with just the right amount of flavor, spice, and chew.

Holy crap these Tacos were good! I had two of the chicken tacos and literally licked my plate clean.

I debated ordering a vegetarian option, but something told me to go with chicken. I’m so glad I did! The chicken had so much flavor and, honestly, I couldn’t think of a better taco filling. It was perfect in every way.

The tacos came with a side of rice and refried beans which were just as equally fresh and delicious tasting. A perfect grease-free meal!

Derek ordered the Carne Asada Torta, which was a big sandwich filled with meat.

His was good (I stole a couple of bites), but mine was better.

If you go to The Taco Bus, order a taco! Trust me, it’s the best taco you’ll ever have. I can’t wait to bring my Dad here next time he’s in town.

We spent the morning browsing a few garage sales (nothing jumped out at us) and I had a Luna Bar as a mid-morning snack.

Santa Monica, CA: LuckDish Brings Japanese Curry to the Streets in a 1968 Airstream