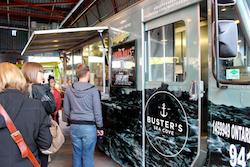 City Council has finally granted approval for more food trucks to vend on city streets. But the new bylaw, passed last week, comes with serious strings attached: only 100 licenses will be made available at a cost of $5000 each, and trucks can’t park within 50 metres of a restaurant – pretty much impossible to achieve in the downtown core. Though Edward Keenan in The Grid says, “there’s nothing really important about food trucks,” he chides City Hall’s “deep aversion to any kind of change—a fear that leads to a compulsive need to overregulate.” For once, Rob Ford made the most sense when he said: “let ’em sell what they want and let the customer decide.”