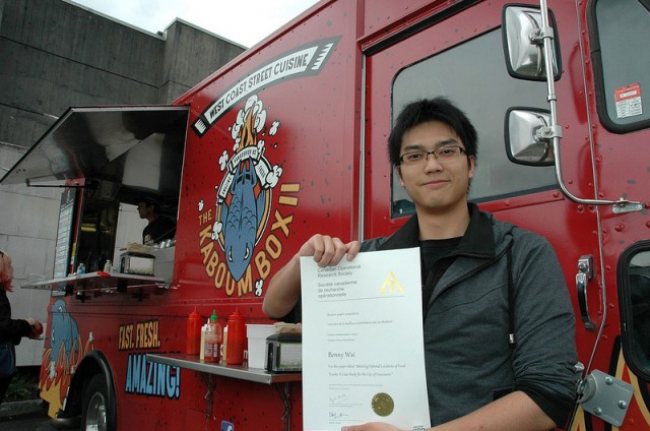 The case study concluded that food trucks, particularly similar ones, should be located a few blocks apart from each other – within walking distance – instead of being cluttered around Robson Square.

Also, Denman Street is one location the student researchers recommended that the city should consider as a new home for food trucks.

In their spring mathematics class, Operations Research Clinic fourth-year students Benny Wai, Lawrence Huen and Alex Liu examined the relationship between food trucks and restaurants. They saw an opportunity to use math to help find better locations for food trucks in Vancouver.

“We wanted a topic everybody could relate to,” says Wai. “We also wanted a project that could give back to the community and show that math is easily applicable to real-life situations.”

Although the city recently announced 15 additional food trucks for Vancouver streets, Wai says it is unavoidable that restaurant owners will be impacted by the expansion of the street food program.

The students provided the results of their research to the City of Vancouver.

“We suggest the city spreads the food carts apart to minimize conflict and give licenses to different types of food trucks for more diversity,” says Wai.

The students are all majoring in Operations Research, a relatively new program in the department of mathematics at SFU. They also won first place in the undergraduate category of the 2013 Canadian Operations Research Society’s student paper competition for their case study.