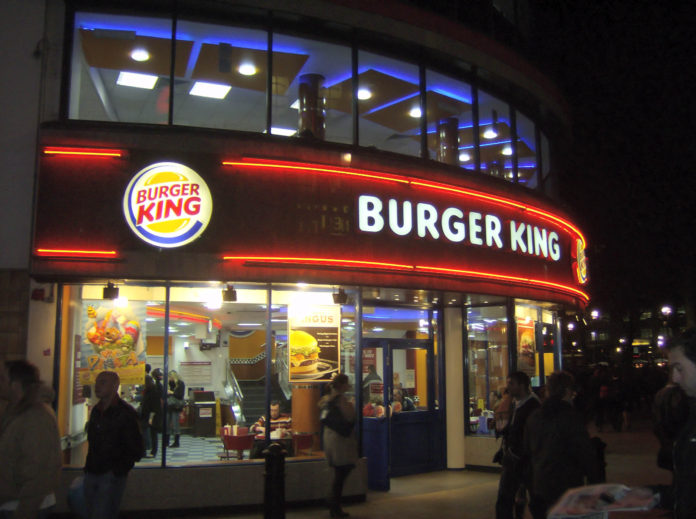 Nor does it taste like Burger King. Not when one of its three new salads is topped with tangy apple slices and dried cranberries, and covered in an apple cider vinaigrette. You can even get made-to-order frappés.

But this is Burger King, all right — with its crown off and its gloves on.

Burger King Monday will reveal a future that’s decidedly less focused on young, hungry guys and more culturally directed towards moms, families and Boomers. In the next 12 months, Burger King and its franchisees will spend about $750 million fixing the menu, revamping marketing, tweaking operations and updating the look of a chunk of its 7,204 U.S. stores. A vastly changed menu, with a record 10 new items, rolls out nationally today.

“This is the biggest change in scope in the history of the brand,” says Steve Wiborg, executive vice president and president of North American operations. “It’s the chain’s largest investment in a one-year time frame.”

USA TODAY was exclusively brought inside early to see the changes and discuss them with top Burger King executives. For Burger King, this may be a make-or-break moment. Never before has the 58-year-old chain rolled out 10 new products at once. But after more than a year of keeping mostly mum under new ownership and new leadership, Burger King says it now wants to update and vastly expand its product line.

The overriding question for BK: Is it too little, too late?

Absolutely not, insists Wiborg, who started as a Burger King crew member at age 16 and eventually become one of BK’s largest franchisees. “Everything is focused on getting to be No. 1,” he says, in reference to McDonald’s, which has been blowing Burger King’s doors off. “For us to set our sights on any other number is not something I signed up for.

But the move comes at time that McDonald’s has lapped the field — and with rival Wendy’s replacing BK in 2011 as the No. 2 burger chain in domestic sales, says Technomic, the research specialist.

These have not been the best of times for Burger King. Its ownership and leadership have been in flux for decades, with 14 executives holding the CEO title in the past 25 years. Its newest, Brazilian Bernardo Hees, is a former railroad executive with no fast-food experience. He was tapped in September 2010, shortly after the global investment firm 3G Capital (whose backers are Brazilian) acquired Burger King and took it private.

Hees, who was not made available to be interviewed, has got plenty on his plate. Burger King’s same-store sales growth in North America— a key figure in determining the relative health of a restaurant chain — has been negative for 11 consecutive quarters, Technomic reports. And in a nation increasingly concerned about health and wellness, the menu and image of Burger King have seemed anything but better-for-you.

Not everyone thinks that the Miami-based burger chain can pull itself out of the swamp.

“You have to give them credit for trying,” says Christopher Muller, dean at Boston University’s School of Hospitality Administration. But Muller has gone to BK only once in the past year with his family — then, only because the store was giving out free fries. “I fear Burger King may be marching farther and farther into the Everglades.”

Former BK CEO Brad Blum, who now runs Blum Enterprises, a firm that owns and invests in restaurants, wonders if Burger King is tackling too many things at once. “Burger King has got to focus on who they are and what sets them apart,” says Blum. “They have to do a few things exceptionally well rather than reacting to competitors across a number of fronts.”

Perhaps, instead of broadening the menu, they should laser-focus on the Whopper, says Ron Paul, president of Technomic. “As a branded burger, the Whopper has more equity than the Big Mac,” he says. But Burger King “let the parade pass them by,” he says, “and now they’re just trying to catch up.”

At least BK is addressing the hot-button issues, says Jeff Davis, president of Sandelman & Associates, which surveys fast-food customers. In the surveys, BK scored low in the perception of selling healthy food and in offering an inviting atmosphere. “Addressing negatives is a good thing, but it’s a very hard thing to do,” says Davis, who notes that McDonald’s began addressing some of these very same issues more than a decade ago.

Here’s a look at three things Burger King is trying to fix:

•The menu. Perhaps nothing is more important than for Burger King to quickly bring its menu up to speed with the rest of the fast-food industry. Burger King executives admit that they fell behind by not broadening the menu with healthier and more snackable alternatives.

Wiborg says Burger King conducted extensive consumer surveys. Consumers made it very clear they wanted more choices at Burger King, he says. “But they want those choices to be best in class.”

That task was assigned to Burger King’s executive chef, John Koch. Over nearly a year, he and his team created and tested more than two dozen new products, which ultimately were narrowed down to 10. The process, he says, was painstaking.

At $2.99, he says, the new chicken strips are the only ones on the market made with 100% “white tenderloin” chicken. But there were twists in creating them. One version, for example, had to be dropped after the marinade started “bleeding,” into the batter, he says, “which wasn’t very visually appealing.”

Similarly, all kinds of creations were tested for its $4.99 Garden Fresh Salads line. But BK settled on Caesar (with shaved Parmesan cheese and home-style croutons), BLT (with three cheeses and thick-cut bacon) and that chicken, apples and cranberry salad. BK also hoped to be on-trend by rolling out an Asian chicken salad, says Koch. But it was a bust in tests, “so we decided to start with three.”

Then, there’s those new drinks. Never mind that McDonald’s has been selling smoothies and frappés for years. New, $2.29 BK Fruit Smoothies, tropical mango and strawberry banana, roll out today. So do $2.29 mocha and caramel frappés.

It would be hard to convince Evelyn Rivas, a mother of three youngsters playing in a Burger King’s kids area, that there’s a better fruit smoothie on the market. She sat drinking one last week at a Silver Spring Burger King. “This is really, really good,” she says. And, she notes, it’s cheaper than at Starbucks.

•The marketing. Burger King’s marketing is about to re-embrace something it turned its back on years ago: celebrities.

The chain will launch a series of food-focused commercials starring familiar celebrities including soccer star David Beckham and talk show host Jay Leno, both of whom recently showed up in Super Bowl spots for other marketers. Singer Mary J. Blige also stars in an ad.

“We wanted a lineup of culturally diverse celebrities to reach all of our targets,” says Alex Macedo, senior vice president of marketing. He won’t say how much Burger King will spend on media, but, he insists, “It’s by far the biggest communications push the brand has done in its history.”

In the Beckham spot, a female BK counter worker gets all goo-goo-eyed when Beckham orders a Strawberry Banana smoothie.

There are other marketing twists. To get folks familiar with its new menu, BK is sending 40 food trucks cross-country to hand out food at events. It also plans sampling inside Burger King restaurants. And at some Washington, D.C., area stores, it’s testing home delivery.

•The look. While Burger King isn’t undergoing the same kind of top-to-bottom redesign that McDonald’s is, it’s slowly making changes to its decor.

Most Burger Kings will get digital menu boards that replace the slat-laden boards of the past. Chairs and tables will mostly be moveable, not cemented to the ground. Some new BKs will even have some softer chairs that feel more like couches. And BK’s red and yellow color palate will be much more evident inside the store.

“If I could snap my fingers and have the whole system re-imaged the first year, I would,” says Wiborg. Instead, he says, some 1,017 U.S. stores will be tweaked in the next year — and 2,500 in the next three years.

And after all the new food, new ads and new look, what about the good ol’ Whopper?

This is, after all, Burger King.

Well, the Whopper with cheese will get a thicker slice of cheese instead of two thin ones. The lettuce and tomatoes on it will be hand-sliced on-site instead of in a commissary. And the Whopper will be sold, again, in a cardboard box.

Yes, you can still have it your way, of course. But now, with a smoothie chaser.