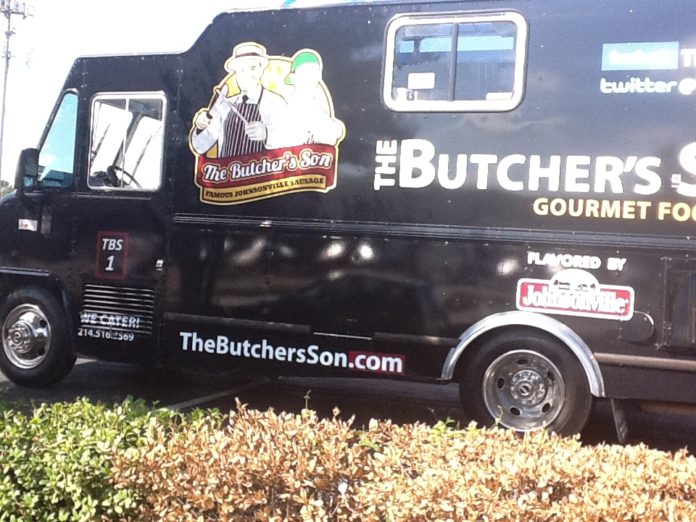 This week, The Butcher’s Son, a joint venture between Johnsonville Sausage and Pool’s Restaurant Group rolled on to the streets of Dallas. Even though advance postings on Facebook and Twitter had said that the truck wasn’t going to be an all sausage menu, I really wasn’t sure how this truck would go beyond your basic brats and dogs.To say it goes beyond is quite the understatement.

For opening week specials, The Butcher’s Son had designated its second day out as “Bring a Friend Day”. So, my friend and I did the best we could to check out the menu. 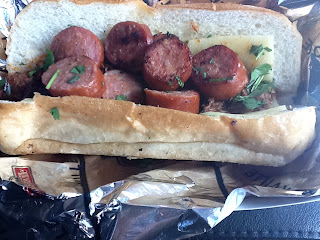 First up was my Pan Handle Po’Boy, a hoagie bun filled with Mexican braised beef, andouille sausage, onions and pepper jack cheese. The beef wasn’t described at “melt in your mouth” but it did. The Johnsonville andouille sausage was flavorful and held its own against the braised beef.  Overall, I loved this sandwich and would get it again. 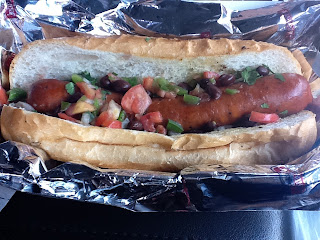 My friend ordered the Santa Fe Sunset, a chipolte Monterrey Jack chicken sausage, topped with black bean salsa, fried jalapenos and cilantro. This is one of the items that The Butcher’s Son had a contest in order to name the item. My friend said the sandwich was great. The sausage was tasty and the salsa was flavorful without being over powering.  I will say that it was huge, she couldn’t finish it, but that might be because of all the other goodies we had. 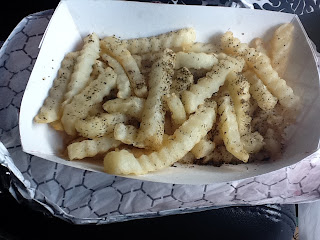 Goodies like the Lime Fries.  When I took the wrap off the fries, the smell of lime immediately hit me and I was worried that the taste would be too much. That was a worry that had no basis.The lime seasoning was light and fresh, the fries were soft and held the lime seasoning well. On a hot afternoon, these fries would go really well with a cold cerveza. 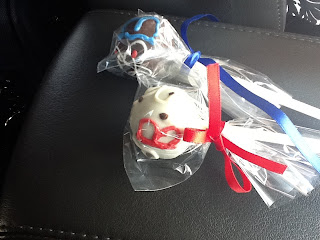 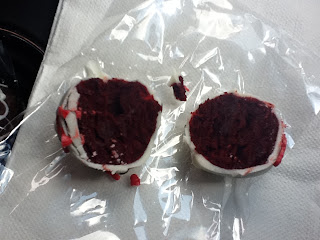 Only a handful of the DFW food trucks have dessert options. The Butcher’s Son gives you two options. In the name of blogging, I had to try both. First, the cake pops. I love cake pops and I make them on occasion, very rare occasion, since they are a time consuming and messy, even though they are very tasty.  Thanks to The Butcher’s Son, I may never deal with the mess again. These cake pops were as good as the ones I make. On the day I was at the truck there were three flavors from which to choose: red velvet, cinnamon and chocolate.  My friend and I chose the red velvet and the chocolate. Both were very good; moist cake, smooth icing. 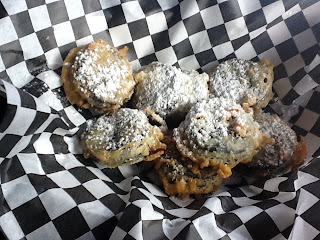 As good as the cake pops were, my favorite dessert from The Butcher’s Son was “Black Gold”, TBS’s version of fried Oreos, sprinkled with powdered sugar.  All those fried items you have been hearing about at the State Fair of Texas contest..forget about them. Black Gold beats them all! I was told the truck owner even eats them for breakfast. The outside is a soft crispy batter while the inside is a yummy Oreo, softened just slightly from the frying process.  Add the powdered sugar and you have a dessert worth eating for every meal.

As good as Black Gold sounds for breakfast,  I am holding out for The Butcher’s Son’s official breakfast menu, which includes various egg and Johnsonville Sausage products. I’ll post about that as soon as I can meet them for breakfast; I suspect a breakfast skewer: maple breakfast sausage wrapped with pancake batter is my next Butcher’s Son meal.

Follow The Butcher’s Son on Facebook and Twitter. They will have two trucks on the streets of DFW so they should be not too far from wherever you are, for breakfast, lunch, dinner or a late night treat.