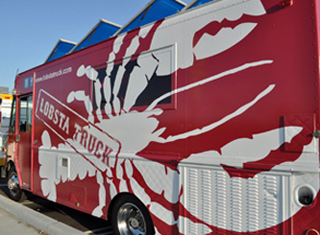 I’ve missed a couple of chances to try The Lobsta Truck, but I found out that it was going to be at the “Too Fat, Too Furious” Best Buy lot in Fullerton, CA I made it a point not to plan anything else for that night. The Lobsta Truck’s menu is simple. There are no fancy names to their dishes, no twists or a fusion of flavors. They sell lobsta rolls, crab rolls, clam chowder, cape cod chips, a couple of desserts and drinks. I didn’t have a barrage of choices thrown at me and I didn’t have to read a paragraph describing each dish. It was simple. I ordered the clam chowder and the lobsta roll.

I’ve had better clam chowder (not pictured), but I’ve also had worse. I liked the sweetness of it and it did have good flavor but it  was a little on the runny side. It wasn’t as thick as I would’ve liked it. It also had way too many potatoes pieces and not enough clams. The only real clam flavor I got was from the soup. This wasn’t bad, but I could pass on spending $4 on it again.

Lobster isn’t my favorite crustacean. I find that it’s texture is a little tougher and not as sweet as the true king of seafood, the Alaskan King Crab. However, I had to order this over the crab roll because the truck isn’t called The Crab Truck. The sandwich was a lot smaller than I expected it to be. It’s not served on your typical roll. The chunks of lobster were nestled into a perfectly toasted thick cut of buttered bread. There was a choice of it being served with butter or with mayo.  For those who know me would know that I’d choose butter on anything.

The bread was still warm but the lobster was cold. There were good sized chunks of lobster in every bite. The lobster was sweet and perfectly cooked. It was succulent and juicy (and YES, I am salivating as I type!). I didn’t want to eat the whole thing because there were other trucks on my agenda that evening but I did find myself saying “Ok, just one more bite” at least 3 times. The problem with my roll? There were shells in 3 of my bites. I can understand if little pieces of the outer shell were missed because it was crushed in little specks, but these were the clear shell/bone from inside the claw where the meat is attached. Also, the roll is a little pricey for the size of the sandwich, $12. All in all, even though there was the little mishap with the shells, I would go back and get another, after payday though.