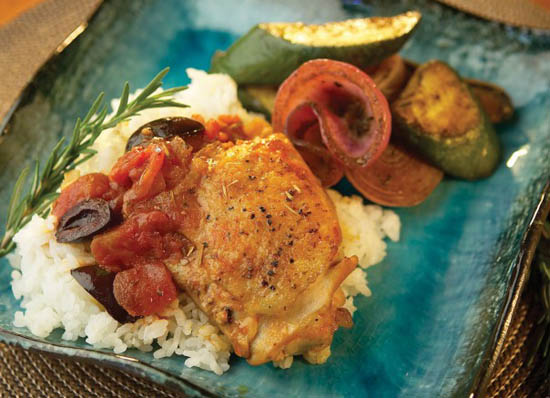 Since 2008, self-taught cook Michi Harris has been serving up full family meals-to-go through Michi’s Cooking Fresh for You. The food is nutritious (low butter, low salt), delicious and affordable. For example, you can get a chicken shepherd’s pie and a barbecue chicken chopped salad that serves six for $53. You order online and pick up the goodies at Star of the Sea cafeteria, near Kahala Mall.

There’s little chance of getting bored—her dishes take cues from around the world. One night may be shredded pork enchilada casserole, the next Greek-style roasted chicken. I ordered the stuffed shells—filled with creamy ricotta—and Caesar salad, and three adults had dinner, then lunch for the next two days.

In April, Harris added to her repertoire and took her show on the road with a lunch truck. Now fans don’t have to wait until dinner. The 14-item menu includes five-spice teri chicken with pineapple salsa, Vietnamese-style pork chops and a salad of the day. The plates come with two scoops of Genji-mai whole grain brown rice,  salad with miso vinaigrette and fresh fruit.

After a nomadic start, Cooking Fresh for You now has regular stops: You can find the truck at Servco Mapunapuna (2850 Pukoloa St.) on Wednesdays and Fridays, from 11 a.m. to 1 p.m. She also makes appearances at Servco Auiki Street on Sand Island, and in front of Sports Authority on Ward Avenue. Right now, her overall schedule is a little mysterious, but Harris promises she’ll start using her Twitter account (@CookingFresh4U) to let hungry lunchers know where she’s at.