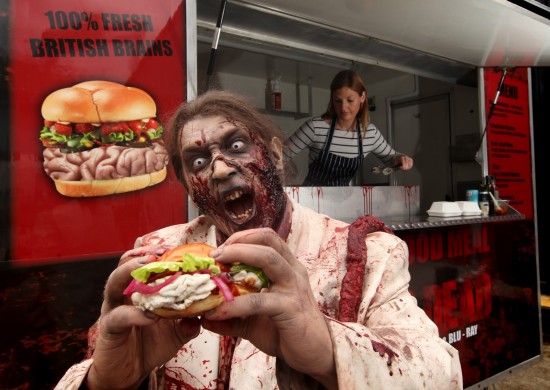 Animal brain is a pretty common ingredient in the cuisine of many Asian countries, but in the Western world it has become somewhat of an oddity, with many referring to it as zombie food. Mark Jankel of Street Kitchen decided to use this fact as an opportunity to shock Londoners and create a very original publicity stunt. On August 22nd he launched his Gory Gourmet food truck, which treats Londoners to dishes made from calf brain, pig feet or cow thyroid. Although created to celebrate the DVD and BluRay release of zombie thriller series The Walking Dead Season 2, the Gory Gourmet was actually a culinary success, with dozens of curious clients lining up to taste the bizarre treats. I think it’s fair to say this particular food truck caters to the the taste of customers both alive and undead.

Asked about his now famous brain dishes are cooked on the world’s first brain and offal food truck, Mark Jankel explained: “We soak it in vinegar and salt, powder and fried until golden crispy. I’m not sure whether it can help you more intelligent or not but if you want a change for lunch, try this dish.” He also added that calf brain is very similar to the human making it even more interesting to devour by zombie enthusiasts and wanna-bes. At $16 a kilo, it certainly isn’t the cheapest ingredient he could have used, but for those looking for something other than the boring old minced meat patty, it’s definitely worth it.