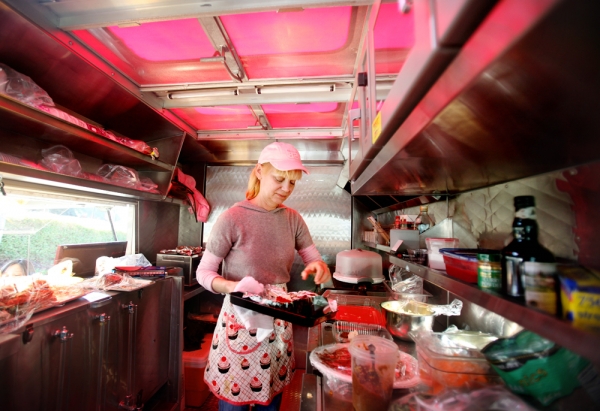 When Kathleen Jensen’s Butterscotch on the Go truck opened for business recently in Menlo Park, it joined one of the hottest trends in food.

Food trucks are all the rage, according to a survey of 1,500 professional chefs by the National Restaurant Association.

In big cities, the trucks are everywhere, often featuring a single specialty, such as macaroni and cheese, Korean tacos, sushi, ice cream sandwiches, or creme brulee.

The craze has finally made its way to Menlo Park, where most of us are familiar only with taco trucks or trucks serving construction workers. Butterscotch on the Go takes curbside dining to a different level.

After working as a personal chef for 10 years, Kathleen Jensen of Menlo Park decided what she really wanted to do was focus on food and interact with more people. A food truck seemed the perfect solution. She and her husband, retired Menlo Park police chief Bruce Goitia, purchased an aging Red Cross disaster relief truck to use as a mobile kitchen.

Inspired by the open-face sandwiches served in France (tartines), Ms. Jensen features them on her food truck menu, in addition to regular sandwiches, salads, seasonal soups, and desserts.

A sample menu includes a beef tenderloin sandwich with caramelized onions on a toasted baguette; a salami, mozzarella and roasted tomato sandwich on artisan bread; and a chicken club tartine with chicken, aioli, bacon, roasted tomatoes and melted fontina served on ciabatta.

Food trucks traditionally roam the streets, often settling in a different location, keeping in touch with customers on Twitter and Facebook. Butterscotch on the Go is no exception. “We will also have a calendar on our website,” she says.

As a new venture, Butterscotch on the Go is operating in the Bohannon Industrial Park area of east Menlo Park three days a week, from 11:30 a.m. to 2 p.m..

Kathleen Jensen has been interested in food since she received an Easy Bake Oven at age 6. While pursuing a high-powered career in retail, she found time to do catering for friends. She began working as a personal chef when her daughter, now 13, was born.

Although she never attended culinary school, she has taken many cooking classes locally and in San Francisco.

As the new business gets on its feet, Ms. Jensen says, her husband is helping out by driving the truck, while she presides over the kitchen. Later, she hopes to hire more staff.

All the salads and sandwiches are assembled on site. Prep work is being done in the commercial kitchen at Studio Cakes in Menlo Park.

For more information, search online for Butterscotch on the Go.