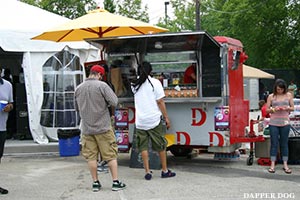 Food trucks have come to The Linc.

Well, food trailers. Carts actually. But that’s not the point. Aramark, which runs the concessions at Lincoln Financial Field, is welcoming some new options for the Philly faithful. Starting last Sunday for the Eagles home opener, The Dapper Dog, operated by Seth Russell and his business partner, served up their trademark franks outside the stadium.

But that’s not the point either. Not the coolest point, anyway.

The Dapper Dog will offer just two dogs each game — one for the Eagles and one for their opponent. That’s right. Philly is being hospitable to visitors. This past weekend the Giants dog had sauerkraut, brown mustard, raw onions, banana peppers and pickles.

“New York is known for so many different types of food it was hard to choose,” says Russell, who normally has the mobile meal machine parked in Northern Liberties on Friday and Saturday nights.

The Giants dogs sold a few, but of course the Eagles dog ruled the day. It’s essentially a Philly cheesesteak and hot dog rolled into one. The frank gets topped with provolone cheese and smothered with thinly sliced beef. Can’t beat that.

And maybe that’s the point. The Philly dog can yell “Scoreboard!” even when the team can’t.

The Dapper Dog is no stranger to supporting local sports fans. It’s been open for business for a year and a half, most notably feeding Flyers fanatics after getting invited to set up outside the Wells Fargo Center this past spring for the team’s playoff run. Alas, they didn’t make it past the Bruins in the conference semis. Now the city’s championship chances rest with the Phillies and a battered 1-2 Eagles team.

“It’s rough because it seems like the last two weeks the Eagles can’t catch a break,” says Russell, a Connecticut native who’s been rooting for the team since he moved to Philly almost five years ago.

So while the Eagles prepare for their upcoming opponents, so does Russell. With the Bears coming to town in a few weeks, he plans on serving a traditional Chicago-style dog. No word yet on what the San Francisco option will be topped with when the 49ers come to town this Sunday. Sushi? Chinese? Seafood?

The only guarantee is a fired-up crowd and some fantastic frankfurters. And, doubtless, the home dog will win the day.