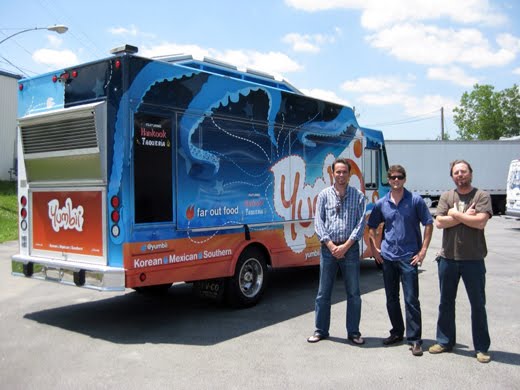 Tomas Lee and his self-described “hole-in-the-wall” restaurant Hankook Taqueria on Collier Road have been featured in The New York Times and on Food Network’s “The Best Thing I Ever Ate” with Alton Brown. Now Lee, 43, is taking his Korean-style tacos to the streets. Literally.

He and business partner Carson Young, 27, can claim Atlanta’s first “street food” vending truck, a trend that already has swept the West Coast. Lee provides the food and Young provides the wheels to peddle $2 soy- and garlic-marinated beef, chicken and pork tacos.

Getting rolling hasn’t been easy. In July 2010, the City of Atlanta permitted the truck, named Yumbii, only to rescind it shortly thereafter due to local ordinances. The truck currently is permitted by the Fulton County Health Department and primarily vends outside a Buckhead office building on Piedmont Road.

Lee and Young are working with county and city officials and hope to gain approval for two established routes in the near future. Meantime, they have amassed 4,000 Twitter followers who can keep tabs on their rovings. They also post their menu and other information on a website, yumbii.com.

Lee, a native of Seoul, South Korea, who grew up in Mustang, Okla., was a chef at several Buckhead restaurants and his own Norcross one before leaving fine dining behind. We caught up with him recently at Hankook — conveniently at lunchtime — to discuss his itch to hit the road.

A: We are a Korean/Mexican-infused taqueria. We have Korean barbecue marinated with soy and red pepper sauce that we put into tortillas.

Q: So why the truck?

A: The truck advertises for the restaurant and helps give a young entrepreneur like Carson his start. It helps us both.

Q: How many trucks do you have?

A: Right now we have one truck. We plan to have more in the future.

Q: Where did you get the truck idea?

A: Carson went on a business trip to Los Angeles with his mother, who has a boutique in Buckhead, and noticed a ton of food trucks. The Korean truck had the longest line. They came back and presented me with this business venture.

Q: You got the first permit for the truck. Why did you need a special permit?

A: You don’t need one if you are just catering. We had to be permitted as a mobile restaurant to offer vending.

Q: Is the truck sanitary?

A: Everybody thought it was going to be this roach coach. It is a high-tech, stainless-steel kitchen on wheels.

Q: How much does a truck cost?

Q: What’s the benefit of a truck, other than helping your business?

A: It brings more energy and foot traffic and revenue to a community. Imagine Virginia Avenue lined with food trucks.

Q: I can see how that would be good for the bars. But wouldn’t the restaurants in Virginia-Highland balk?

A: I’ve always believed that competition makes everybody better.

Q: Are you making money on the truck?

A: We are starting to generate a profit. It has been an amazing ride.