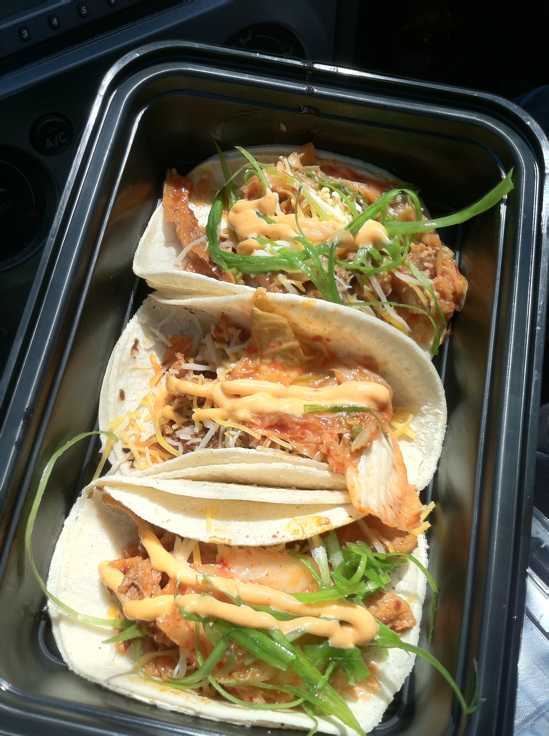 It’s a Wrap. Final Words on the Great Food Truck Race in SLC.Except for Roxy Grilled Cheese (from Boston), which was eliminated here. Not surprising, considering the slow start on Saturday, followed by a forced move from its chosen location.

Our favorite food was the hot dog from Hodge Podge, a big beef frank bedded in its bun with a strip of thick bacon, shredded cheese, braised shortrib and arugula. There were several trucks we didn’t get to, but fortunately fellow SLM foodies Heidi Larsen and Josh Wangrud did:

Josh reports:”We had the Spick Pork tacos and the Ribeye Tacos.  Pretty good except for the shredded cheese was kinda weird. The kimchi was good though…”

Reader Traci Chase said, “The Lime truck had the best mac n cheese I have ever had and their passion fruit limeade was to die for!”

Once again, food proved its power of connectivity. We ran into old friends in food truck lines and made new ones. I was surprised at how many people turned out for this viral event. Some—like folks at the Earth Jam in Liberty Park—didn’t know it was a TV stunt; others were in on the whole story and excited to be part of the Utah episode. Everyone was eager to taste the food.

So, the big takeaway from the weekend eating: Salt Lakers love food trucks. They will go where they are.

I just hope the powers that be, the ones that make it difficult for food trucks to operate locally, are paying attention. They could make Salt Lake an even better place to live and visit by writing regulations that allow these rolling restaurants to flourish.