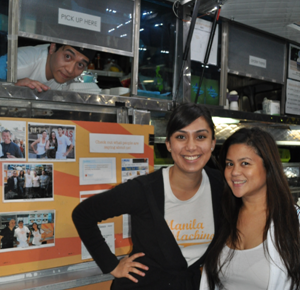 I’ve never heard any buzz about this truck. I was introduced to  it through Twitter. I was curious and looked at their website.  I finally tweeted asking if they were planning a visit to the West Covina area because there are A LOT of Filipinos in that area and thought they would get a pretty good reception.  I got a tweet back asking if I had any suggestions. The TruckSquad holds GFT Tuesdays at Best Buy in Industry and I told them to contact the Truck Squad to make arrangements and they did.

“Traditional ways are wonderful; but new ways, when applied with understanding and sensitivity, can create a dish anew – without betraying the tradition.” – Doreen Fernandez: critic, author, Filipino food historian. This quote is the first thing you see on their menu online. So naturally I thought “YES!! Authentic Filipino food, not a fusion where flavors get lost in all of the different ingredients; just good old fashion Filipino food like how my mom used to make”.

I was already full from all of the  food from the other trucks and was only going to order the ube cupcake but Ed came back with The Original Manila Dip, Longganisa slider and the ube cupcake.

The Original Manila Dip had shredded chicken adobo and caramelized onions on toasted pan de sal, a traditional roll in the Philippines. It came with an adobo dipping sauce. I don’t know about you, but I LOVE to smell the something before I eat it. If it doesn’t smell good, I just can’t put it in my mouth. (Get your minds out of the gutter people, please. I’m talking about food here!) The pan de sal was warm, the smell of warm pan de sal is so soothing. Then I smelled adobo meat. At that first sniff, I knew it was going to be good.

I took a bite.. DUDE! I didn’t expect it to be that good! I didn’t even need the adobo dipping sauce. The shredded chicken was soft, as if it was simmering for hours in a bubble bath of adobo sauce. The flavors were on point, and traditional. It had enough vinegar to compliment the sweetness of the caramelized onions while the soy sauce gives it that extra dimension of taste. I think I may actually like it better on pan de sal than on rice. The pan de sal soaks up more of the sauce and holds up to it and doesn’t get soggy. Those who really know me, know that my daughter is the fiercest critic. She loves adobo and will only eat my mom’s because all others have failed. I had her take a bite. The minute I saw her face, I knew I had to give up my slider. I don’t think she’ll ever admit, or I for that matter, that this adobo was better than my mom’s but this indeed is a MUST try!!!

On to the longganisa slider. Sweet pork and garlic sausage with caramelized onions, arugula and mango jam on a pan de sal roll. The longganisa was cooked nice. I don’t know about you, but when you eat longganisa, because all of the oil and fat, you can taste it even 2 days after. Not in this case, which is a good thing. The sausage was split and fried and surprisingly wasn’t as oily as I thought. I did think that the mango jam (which was tasty) paired with the sweet longganisa made the slider a little too sweet. There wasn’t enough contrast in flavors. It was a good sandwich, but would have liked a little acidity to cut into the sweetness of the longganisa. Overall it was still a good slider and would probably order it again but ask for no jam or maybe vinegar on the side.

Now, the ube cupcake. First it looked so cute. A huge dallop (is that an oxymoron?) but it was a pretty big dallop of frosting and it was topped with toasted coconut shreds letting me know that the frosting had coconut (frosting 101.. always garnish the top with the main ingredient of the frosting). I tasted the frosting first. You can really taste the butter and it wasn’t overly sweetened by the sugar. You can also taste a hint of coconut. It wasn’t overpowering, it just kind of lingered. It was a nice change from the norm. I tore a piece of the cupcake off. It was soft, a little spongey.  I took a bite out of it and you can taste a little bit of ube flavor. I took another bite with the frosting. The weird thing about it, you can taste more of the ube flavor when you eat it with the frosting. I would’ve liked the cake itself to have a more dominant flavor of the ube. Overall this cupcake was just ok for me. I probably would’ve enjoyed it more if the frosting was a little softer and maybe swirled over the entire top of the cupcake so that I could get frosting in every bite.

My experience with The Manila Machine far exceeded any expections that I had. The food was fresh, flavorful and traditional. Next time I will have to try their Tapa Silder, Turon (one of my all time favorite desserts!) and Leche Flan. So definitely expect a Manila Machine review part 2. I wanted to take a picture with the owners but the line was long so I really didn’t want to impose but I just had to give props to them so I asked anyway. People were probably thinking “you  crazy chick, don’t you know we are waiting in this fricken long line freezing our butts off and you want to take a picture?”  Even though it stopped their production I was glad Nastassia and Marvin were cool enough to take time out for a quick pose! By far, the best Filipino Food truck roaming the streets of Southern Cali.