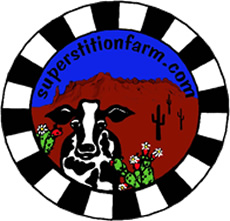 by Angelique Soenarie | The Arizona Republic

Casey Stechnij is finding ways to keep farming a part of his community through freshly made hamburgers.

The Mesa dairy farmer now runs Our Place on the Go food truck and plans to open a restaurant at Superstition Farm where he gives farm tours.

“We’re tired of sending (our visitors) to other places when we can provide them with a great atmosphere and good food,” said Stechnij who also makes and sells homemade ice cream, herbal butter and cheese at his farm’s boutique.

The food truck is at the downtown Gilbert Farmers Market from 7 to 11 a.m. Saturdays. The chef is Matthew McGowan, formerly of Dutchman’s Hideout, a fine-dining restaurant inside the Mining Camp Restaurant in Apache Junction. McGowan has also worked Sheraton Wild Horse Pass Resort & Spa and Brinker International Restaurants.

“It’s back to basics for me by getting as close to farm-to-table as much as possible, and getting people to know where their food comes from as much as possible,” said McGowan, who wants his triplets and 5-year-old to learn about farming and good food, too.

At Gilbert’s farmers market, he sells an egg breakfast sandwich ($7) made with bacon, spinach and tomatoes with a house-made sauce. For lunch, he makes a Superstition Farm cheeseburger ($8) topped with bacon, spinach and chipotle aoli sauce that’s served with potato puppies. The deep-fried potato puppies are made with roasted corn, cilantro and lime. Another item is the “big dog” ($6), an over-size hot dog topped with grilled onions, pepper Jack cheese and chipotle aloi served with potato puppies.

The food truck also sells food during farm tours Tuesday-Friday from 10 a.m. to 2 p.m. On Wednesdays it offers a $30 dinner for four to go. It includes a slowed-cooked whole rotisserie chicken, a loaf of cornbread and sides of coleslaw, potato salad and baked beans. Call ahead to place an order.

Stechnij hopes to open an extension of his food truck at the farm, a casual outdoor lunch restaurant sometime this year. The restaurant would be near the barn where the dairy tours begin. He’s already built a kitchen with an oven and has picnic tables near it. Food would be served outside.

West Chester, PA: Greece, but not greasy: a look at the Greek Express food truck