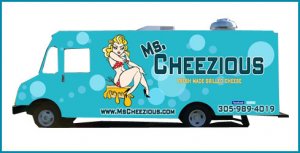 Every Friday night, a caravan of food trucks, usually with more than 70 wheels in total, park at an empty West Kendall lot and sell gourmet cooking to throes of foodies.

The gourmet food truck phenomena, a national trend shown on TV, has hit West Kendall in a big way. Called the Tamiami Truckers Food Court, the group of trucks get together from 6 to 11 p.m. Fridays in an empty lot on Southwest 137th Avenue and 127th Street. Bring your hunger — and some lawn chairs because there are no tables. To be sure they are coming, you have to follow them on Twitter, Facebook or sometimes Yelp. This is the new age’s “word of mouth.”

Steaming, frying, and grilling, the group has a wide array of foods, and each truck offers something different. Trucks such as Cheese Me and Ms. Cheezious specialize in cheesy food, such as grilled cheese sandwiches and cheese-covered meals. Burger Beast, Dos Lokos Burgers, and Latin Burger and Taco serve sliders and big-mouth-burgers, among other things. There are many others: Latin Grill, Wing Commander, gastroPod and Jefe’s. There are too many to name them all, and different ones show up each week.

There’s probably something for everyone. Families, friends of every age and even pets show up. Best friends Jessica Lorenzo, 16;  Jessica Medina, 19 and Alexa Funcia, 20 chomped on skewers from Daddy’s Grill, tacos from Montaco and crepes from Caza Crepes. With a full stomach, Lorenzo said: “I’d never been here before tonight…The food is so awesome at each truck, and we have shared a bit from almost every truck.”

“The turn out every Friday night at this spot is of over 1,000 a night,” said Jim Heins, owner and creator of Latin Burger and Taco.

David Garcia, 32, the owner of the truck The Fish Box and restaurant La Camaronera, said life in a truck is a 24/7 deal.

“It’s a non-stop lifestyle. The food is caught by us, and comes from our boats to our wheels,” Garcia said.

Most trucks are family operated, with close relatives working side by side.

Kevin Gleizes, 25, the owner of  Caza Crepe,  hires people to help him work the truck, whose base is in the Doral. The truck caters and delivers, unlike most trucks. Gleizes said he wants to expand his business and hopes to develop a franchise and open a restaurant and have more trucks expand to the rest of Dade and Broward.

One truck stands out a bit from the rest: Wrapidito is a trailer attached to a pick-up and it opened Dec. 22. Manager Denise Gonzalez, 20, said starting out has been rough.

“We had heard about the food trucks, and decided to open one of our own,” Gonzalez said. “We wanted to be different from the others; we decided to make wraps and salads.”

She said the name Wrapidito” in English translates to “rapid wraps.” She hopes to get a larger truck in three to four months.

Tania Ramirez, 55, of Food Cart USA, said she has manufactured most, if not all, of the trucks.

“We work on building trucks and finding locations for them to park and become successful in their sales,”  Ramirez said.  “We came from California and saw that the mobile food business was big, so we decided we’d bring the concept to Florida and it all started with Latin Burger and Taco.”

With the mobile food truck business growing in South Florida, the issue seems to be location. Many of the four-wheeled businesses claim that finding a spot to park is difficult and they sometimes get kicked out. Restaurants complain that the trucks take business away, but Gourmet Food Truck Association representative Henry Alard, 55, said: “These trucks stimulate business, create jobs and are ultimately boosting the economy. They aren’t roach-carrying trucks like many think. Each truck goes through inspection and has to be registered in Tallahassee.”