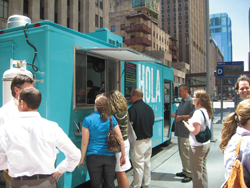 MARQUETTE — The Minneapolis food truck craze continues to grow. In the June 5-19 Journal, we published a map of where to find the various food trucks Downtown, and now two more have joined their ranks.

Co-owned by Bradstreet Craft house bartender Birk Stefan Grundem and Design Collective founder Christina Nguyen, Hola Arepa brings sustainable Central and South American fare to the food truck scene. An arepa is a hand-pattied cornmeal cake, which the truck offers up in a variety of fillings, such as pulled pork and chicken. The truck will also occasionally sell more adventurous offerings such as cuy (guinea pig), which is a common dish in Central America.

Hola Arepa was usually spotted on Marquette during its first week, as was Vellee Deli, a big black truck that serves Asian/Mexican fusion food. The menu includes items like a Korean BBQ burrito, a Thai curry burrito and more traditional items like egg rolls.

For a sweeter option, head over to the adorable Cupcake On The Go truck, usually found at 10th and Nicollet. An offshoot of the Cupcake restaurant at 3338 University Ave. SE, the owners decided to take their cupcakes to the streets in part because of the extensive construction on University. The menu of delightful, artistic cakes changes daily, and most are priced at $2.50.

Cupcake will also appear on Food Network’s “Cupcake Wars” on June 21 at 7 p.m.

Winnipeg, CAN: A Look Back at Downtown’s ManyFest